The Fireman by Joe Hill
My rating: 4 of 5 stars

”...Her left arm was sheet music. Delicate black lines spooled around and around her forearm, bars as thin as the strands of a spiderweb, with what looked like golden notes scattered across them. She found herself pulling her sleeve back to look at it every few minutes. By the end of the following week, she was sketched in Dragonscale from wrist to shoulder.

When she got over feeling winded and sick, she had to admit to herself that it was curiously beautiful.” 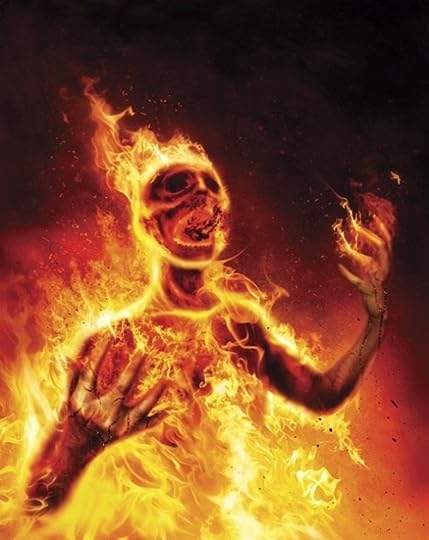 When Harper Grayson comes down with Dragonscale, A.K.A. Draco Incendia Trychophyton, it is a death sentence. The contagion spreads quickly through the body, wrapping its tendrils around the skin, leaving behind these beautiful shimmering scales that eventually start to smoke until they reach a certain maturity or the person comes under a large amount of stress. They then spontaneously combust, experience cellular combustion, develop contagion points, and disease vectors are produced. We can be as scientific as we want to be, but the end result is the infected turn to ash.

This disease is highly contagious.

When one person lights up, it can cause a chain reaction where anyone with dragonscale in the area joins the inferno.

When the crisis hit, Harper volunteers at the local hospital wanting to help anyway she can. She is careful, wears a hazmat suit, but the problem is there is a lot of conflicting information on how the contagion is spread. Almost simultaneously with learning she has dragonscale, she discovers she is pregnant.

Joy crushed by the certainty of death. The disease moves so fast in most people that it wouldn’t be the right time to start reading War & Peace or Infinite Jest. You might want to think more in terms of The Bridge Over San Luis Rey.

Her condescending, but loving, husband Jakob is furious. He becomes fixated on them ending their lives now even though he doesn’t have the contagion. There is much more to be learned about Jakob, so as you read the book, be sure to keep a baseball bat hidden down the back of your leg because you are probably going to need it.

”Harper supposed it did not pay to be too impressed with a man just because he could ride a unicycle.” A good rule of thumb for every woman to keep in mind. :-)

People are dying so fast in such numbers few are not directly affected. Those who live lose as much or more than those who die. Too many people are gone too quickly. ”We are taught to think of personality as a singular, private possession. All the ideas and beliefs and attitudes that make you you--we are raised to believe them to be a set of files stored in the lockbox of the brain. Most people have no idea how much of themselves they store off-site. Your personality is not just a matter of what you know about yourself, but what others know about you. You are one person with your mother, and another with your lover, and yet another with your child. Those other people create you--finish you--as much as you create you. When you’re gone, the ones you’ve left behind get to keep the same part of you they always had.”

You may still have that part of the people you have lost, but it is like having a garden without water or having a flower in the window that the sun never reaches. Without seeing that person, revitalizing that connection, eventually it will wither and die.

With the help of a man referred to as the Fireman, Harper finds her way to a small community of followers who have figured out how to control the disease. ”Cortisol kicks off spontaneous combustion. But oxytocin--the social-networking hormone--puts the Dragonscale at ease.” In other words, stress releases cortisol which inflames the disease, but oxytocin, produced by say singing together, turns the disease into a benign light show.

On the outside of the community is a radio personality who calls himself the Marlboro Man. He has assembled a crew of executioners who travel around looking for the infected so they can eradicate them. There are always those people who are kept in check by society, but once civilization starts to crumble, their true nature emerges, and we discover that what they really like to do is kill people. The fear of the infection is just an excuse for them to drop the pretenses surrounding their own warped and blackened soul and be who they have always wanted to be...a killer.

Things go well at the community of the infected for a while, but as always seems to happen with human beings, eventually a power struggle breaks out. The camp breaks into factions. The one man who can actually control the dragonfire and use it as a weapon, the Fireman, is the man they all respect/fear. He lives with the community, but on an island away from the rest of them. He has his own demons he is wrestling with, and fire is just one of them.

As the world goes up in flames and the sanctuary community starts to come apart, the only beacon of hope is Martha Quinn’s voice, a blast from MTV of the 1980s, broadcasting over the radio about a sanctuary on an island off the coast of New England. To get there will become an odyssey as arduous as navigating the terrain from Cormac McCarthy’s The Road. 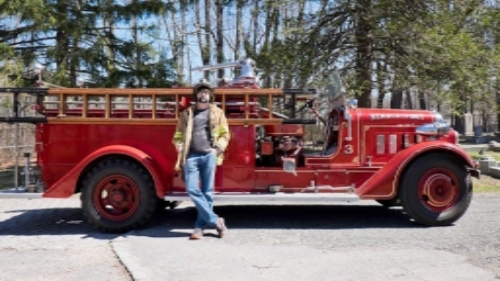 I am a huge fan of post-apocalyptic books. It is a part of me I’m still exploring to determine exactly why I find them uplifting. Is there a twisted part of my psyche that wants the civilised world to end? Am I as crazy as the Cotton Mather followers of the early 18th century? Am I so bored with my existence that I feel a good end of world scenario would shake me out of my doldrums? I don’t think I suffer from any of those things, but self-delusion is always a good possibility. I think what is more likely is that I like seeing humanity when their backs are against the wall, their ass is stuck in the darkest, deepest crack, and absolute annihilation of the human species is on the verge of becoming a reality, and we find a way to survive.

Posted by JEFFREYKEETEN at 10:30 AM