The RIV travels to China to assist with the mysterious Skyspears. 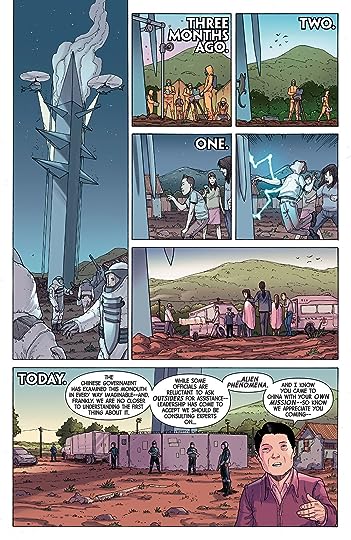 After some extensive searching, the Inhumans have found Flint's home.

All-New Inhumans Skyspears was a really good volume. It had two storylines going on. The first focused around the Skyspears and the second was about Flint's birthplace.

The Skyspears storyline while informative was quite bland. The team heads to China to examine the Skyspears and Parker Industries along with Spider-Man assist in the research. A Chinese supergroup comes to chase away the Inhumans and all kinds of problems break loose. First off I have to say I hated the artwork. I'm sure it works for certain characters but I found it incredibly frustrating after Stefano Caselli's realistic depictions. Everyone just looked frumpy and oddly shaped to me. Second the story was simply too abrupt. Now this may have been due to the fact the series was cancelled. Perhaps the Skyspears would have been revisited and this story was meant to be an introduction, but it felt like a short awkward look at a much larger idea.

Flint's story about his birthplace was excellent. I absolutely loved every bit of it. Finding another pocket civilization of Inhumans was an exciting idea that was really well done. The civilization, Utolan, had its own unique aspects while it continued to practice and worship the process of terrigenesis. I was initially unsure of the addition of Anna Kravinoff to the cast for this story, but she was quite interesting. I didn't like the fact that her story didn't get an ending, but I blame that on the cancellation as well.

So as I mentioned All-New Inhumans got cancelled which really sucks because it was just beginning to come into it's own under James Asus. The fortunate part is with a number of Inhuman centered stories like Death of X and Inhumans vs X-Men the crew of the RIV haven't vanished yet.

Skyspears was the best volume of the short lived All-New Inhumans.