THE PLANTAGENETS BY DAN JONES

The Plantagenets: The Warrior Kings and Queens Who Made England by Dan Jones
My rating: 5 of 5 stars

”A king who fights to defend his right has a better claim on his inheritance. Struggle and largesse allow a king to gain glory and territory.” --Bertran de Born 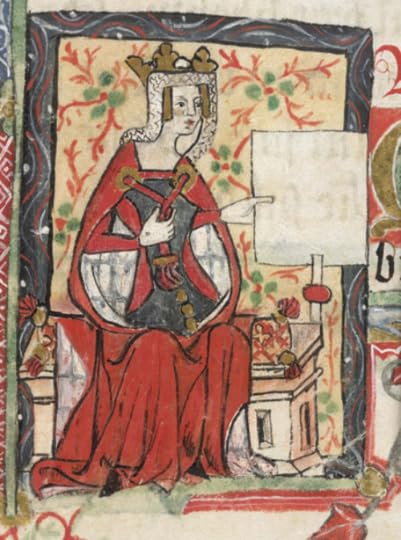 It all begins with a shipwreck.

200 of the most beautiful and powerful men and women of England and Normandy board The White Ship to travel from Normandy to England. They are exuberantly drunk, and the crew of the ship is also three sheets to the wind. Out of all of these important people, there is one who is head and shoulders more important than the rest...William the Aetheling, named for his grandfather William the Conqueror. He is the heir apparent to the throne of England.

The 17 year old drowns along with everyone else.

Henry I is not only devastated by the loss of his son, but also knows that the death of William has put his kingdom in jeopardy, for he has no other legitimate sons.

Call it fate or luck or insight, but Stephen of Blois, cousin of William, is also a member of that party, but he elects not to join the others on that ship. He books passage on a different boat with a crew maybe not completely sober, but less intoxicated. He survives the passage to England.

When Henry dies, he tries to leave his kingdom to his daughter Matilda. He brings all the important, most powerful men of England to his death bed and makes them swear allegiance to his daughter. They do, but they must have had the fingers of their left hand, as they held the hand of the King with their right hand, crossed behind their backs.

The crown has barely settled on the head of Matilda before it is violently knocked off. Stephen of Blois, who is also a grandchild of William the Conqueror, becomes King. England descends into a costly, bloody civil war. Matilda is supported by her half brother Robert, 1st Earl of Gloucester, who is by all accounts an honorable and capable leader and probably, if he had been legitimate, would have made a very good king. 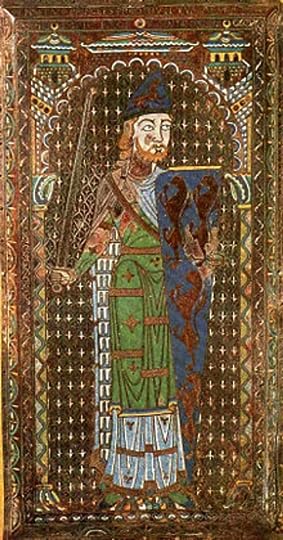 Geoffrey of Anjou, the donor of sperm.

Matilda married Geoffrey Plantagenet, Count of Anjou, and starts having babies, almost in a mercenary sense because her goal is to see a son of hers on the throne of England. Plantagenet is from the latin planta genista, meaning sprig of broom. Geoffrey adorns himself with the yellow flower of this shrub, and the nickname sticks. He is a warm, expansive man whom people adore. Now by all accounts I’ve read, Matilda is condescending, cold, and a manipulating woman, not well liked by those of high breeding or low breeding. Geoffrey, luckily, is a man among men because he braves the frigid landscape of her bed and produces three healthy sons, though I have visions of Empress Matilda being one of the first dominatrixes in history with a whip and a commanding voice instructing Geoffrey to mount up or bear the consequences.

I have a particular interest in the Plantagenets due to a marriage between James Ives and Anna Ashley in 1799, which happens to also be the year that George Washington dies. Now, James and Anna are my 4th great grandparents. My mother was an Ives, and I am directly descended from James. Anna was of a bluestocking family of Vermont. Her father, Elisha Ashley, served with the Green Mountain Boys in the Revolutionary War and also is the patriot who allowed me to join the Sons of the American Revolution. I’m not really sure how James landed such a catch because little is known about him. I like to think that he was a charmer. Anna is not only of a good American family, but she is also descended from the Kings and Queens of England.

Previously, I had believed that my connection with the throne of England ended with Henry III, who ascended the throne as a 9 year old after the death of his odious father, King John. When Henry’s son Edward took the throne, I was the victim of primogeniture as I am descended from the second son, Edmund Crouchback. 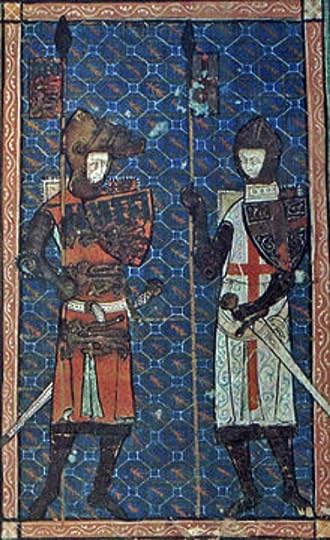 Great name, eh? The Crouchback refers to the crossed back and his service in the 9th Crusade. Well as it turns out, Edmund might be off the throne but, when his great granddaughter Blanche of Lancaster marries her cousin Henry IV, his descendents do reach the throne once again.

One needs a scorecard and vast wall spaces for family trees to keep track of the genealogy of the Plantagenet family. Dan Jones does provide some very nice maps and family trees that are a constant source of references to me.

Henry II, the first son conceived in that frigid marriage bed of Matilda and Geoffrey, now King of England after some more bloody fighting with King Stephen, marries the amazing Eleanor of Aquitaine. I believe she is the only woman to marry the King of France and the King of England in history. She is intelligent, educated, and powerful in her own right. She is a catch for any man, even a king. ”Eleanor had been a magnificent queen whose influence had straddled three important reigns and who had loved and guided her sons even when they behaved unwisely.”

Their third son, Richard Ist the Lionheart, becomes King of England. He spends so much time out of England that his brother John, the fifth son and baby of the family, tries to take over England. Doesn’t really work because, once Richard returns, John’s support folds up like tent in a gale force wind. John does reach the throne when Richard dies from a crossbow arrow after exposing himself needlessly to danger.

Now there is an interesting fly in the ointment of absolute power for John. His brother Geoffrey, who is the brother between Richard and John, has a son named Arthur of Brittany, who by the rules of primogeniture should have been King of England after Richard. Richard, in fact, had named Arthur as his heir whenever he left England.

The problem for John goes away when Arthur mysteriously disappears. Dan Jones offers an explanation, but I will let you read the book and see what you think. John is half the man that his brother Richard is, illustrated best by his contemporaries who refer to him as John Softsword. 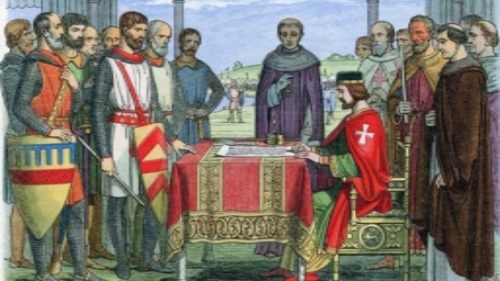 John mismanages the affairs of the kingdom and alienates almost everyone. He raises money by kidnapping the mistresses and children of priests and extorting the priests for money for their safe return. He makes widows pay huge fines to remarry. He tries to seduce wives and daughters of his supporters. The affairs of the kingdom are in disarray, and he keeps ceding more and more of the kingdom that his father and brother built to the French. All of these weaknesses of John’s eventually lead to one of the most famous documents in English and world history. The Magna Carta is signed on the 15th of June 1215. Basically, the lords of the land are tired of his shit and want to share more of the power. For the first time in history, controls and rules are imposed on a king.

John’s son Henry III becomes king of England at age 9. His main contribution to history is that he renounces his claims to empire and becomes a peer of the King of France. Henry II is rolling around in his crypt.

Fortunately for England, his son Edward I is made of sterner stuff and is a strikingly tall and virile man. The nickname the Scots give him is Longshanks. He is a good tactician and builds the English army into a fearsome fighting force that conquers the Scots and the Welsh at every turn.

His son Edward II is a weak, ineffectual ruler who surrounds himself with his young peers who prove to be unsuccessful in guiding Edward or the affairs of England. He prefers the company of his friends, such as Piers Gaveston, rather than his Queen Isabella, daughter of the King of France. She is not amused with his behavior nor in the way he treats her. She feels more like a maidservant who is getting bent over a chaise lounge from time to time rather than a daughter of a king. When the time is ripe, with the help of her husband’s numerous enemies, she overthrows him and installs her son as king. Rumor has it that she had her husband killed by having a hot poker inserted up his rectum as a commentary on his preference for his male friends, but Dan Jones believes this is just a story to further discredit her husband and strengthen her son’s hold on power. 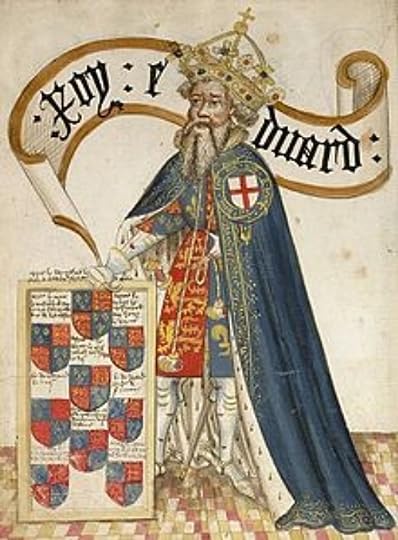 Edward III has a problem. He is underage, and it takes him years to wrest power from his mother and her lover. He does grow into a very good king, more like his grandfather, and wins numerous battles against the French, reclaiming much of the territory that was once held by Henry II and Richard I. The famous English longbow becomes the deadliest weapon on the field of battle under his reign. Everything is going well, but then his very capable son Edward the Black Prince, weakened by diseases acquired on his numerous journeys to fight in the Middle East, dies before he can become king. This is a devastating loss for Edward and for England. When Edward dies, Richard II comes to power at the age of 14.

Rewind the era of Edward II. Richard II puts his friends into positions of power they are hardly qualified for. He annoys the royal families. Numerous heads are lopped off when the lords have power, and then when Richard reasserts himself, more heads are parted from bodies.

There are so many points in the Plantagenet era when they should have lost power. John, Henry III, Edward II, and Richard II are all legitimately bad kings who could have ended the reign of the Plantagenet family. Fortunately, there are strong kings, such as Henry II, Richard I, Edward I, and Edward III, who prove to be powerful, capable rulers who, especially in the case of the two Edwards, overcome the incompetencies of their immediate predecessors.

Citizens of a realm will put up with a lot as long as their king is strong. They don’t mind dying for an effective king who shows leadership and ability, but they do mind dying for a weak king who is much more worried about his pleasures than the safety and concerns of his kingdom. Fortunately, there are men and women willing to stand up to those Plantagenet kings who prove unworthy, and thankfully, there are more capable members of the family available when they need them the most.

I know the Tudors have received more attention in recent years than their predecessors, the Plantagenets, mainly due to a strange fascination with Henry VIII and his numerous wives, but I think that most people will find this overview of the Plantagenets equally fascinating and might even discover themselves believing, as I do, that the Tudors are merely a ragtag band of usurpers to the true kings and queens who built England. Wonderful overview. Highly Recommended!

Posted by JEFFREYKEETEN at 7:10 PM