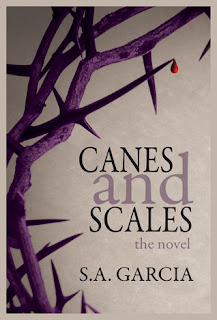 S.A. Garcia
Dreamspinner Press
Reviewed by Nancy
5 out of 5 stars

Serpent Prince Linden of Ardaul is determined to drag his barbaric, power-hungry country into the modern age by encouraging learning, advances in the sciences, and tolerance. His insane brother Edward, the King, delights in making him pay for his efforts.

Long years of watching his back, fighting wars, and solving conflicts started by his cruel brother have taken a toll on Linden’s body and mind, and he needs a respite. When Linden meets an alluring young bed slave named Alasdaire, his weary heart responds. Alasdaire is an exotic mix of southern royal Totandian elf and human, and, although he’s also suffered hardship most of his life, his loving personality captivates the Prince.

Despite their differences, Alasdaire—canes, and Linden—scales, unite in body and soul, but their romance is nearly shattered by betrayal. When Linden becomes King, magical assassins, treachery, and threats plague them. They narrowly escape death more than once. The lovers must discover who wants them dead and more importantly, where they can turn for aid. Neither enemies nor allies are what they seem. Only time will tell who means to harm Linden and Alasdaire—the elves, the imprisoned Edward, or something even deadlier—and time is one thing they don’t have.

Canes and Scales was the perfect story for me to read while on my way to New Jersey for a friend’s wedding. This is a quietly absorbing, gentle, and magical tale of two very different men, their devoted love, and the hardships they endure – prejudice, betrayal, and treachery. It was extremely easy for me to get lost in this story in spite of traffic jams and bumpy roads.

(If you want to know why it was essential for me to get lost in a story while driving to New Jersey, then read my review of The Pines).

Told from alternating viewpoints, we first meet Linden, the battle-weary Serpent Prince of Ardaul, who is on his way to his cousin Keith’s country home for a much-needed vacation from wars and his crazy, power-hungry brother, King Edward, who despises the Prince’s progressive politics. Keith has provided his cousin respite from his duties in the form of Alasdaire, a 20-year-old half-elven pleasure slave.

Life is difficult for Alasdaire, who is lonely since his mother’s death and unwelcome in either the human or elven communities. Despite his noble status, he has been banished from his family home after committing a vengeful act against his father and is sold to Lord Keith. To ensure Alasdaire serves his sentence, he is forced to wear a Torvine Catch around his neck which will release poison needles if Alasdaire ventures outside the estate’s boundaries.

We learn more about Alasdaire’s and Linden’s past, and watch their relationship develop from one based on sex to something much deeper. There are formal dinners, noble visits and other activities to keep the men busy. Linden also keeps abreast of news in the city and palace affairs, and answers communications when necessary. There are 20 years between the men and I appreciated that their age difference is quite evident throughout the story.

If you crave intense drama, relationship conflicts, and graphic sex, this is not the story for you. This is a beautifully written, highly descriptive fantasy story with steampunk elements that would be suitable for those readers who like a lot of sweetness amidst all the hardships and treachery the characters face.

I was thoroughly enchanted by Alasdaire and Linden and hope their story isn’t over.