THE LOST CITY OF THE MONKEY GOD BY DOUGLAS PRESTON

The Lost City of the Monkey God: A True Story by Douglas Preston
My rating: 4 of 5 stars

”I peered out the window, transfixed. I can scarcely find words to describe the opulence of the rainforest that unrolled below us. The tree crowns were packed together like puffballs, displaying every possible hue, tint, and shade of green. Chartreuse, emerald, lime, aquamarine, teal, bottle, glaucous, asparagus, olive, celadon, jade, malachite--mere words are inadequate to express the chromatic infinites.” 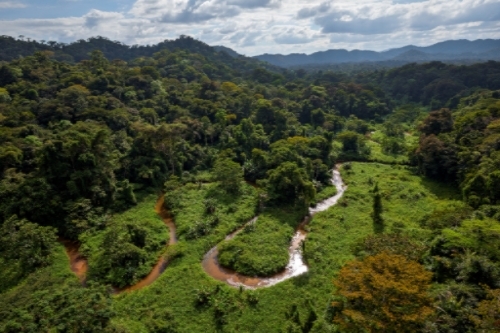 Douglas Preston was always interested in lost civilizations, so when he got the chance to join an expedition into the mosquitia jungle in Honduras to find the Lost City of the Monkey God, he was more than interested, he was all in. There had been many explorers before who had attempted to find this “mythical” place, but except for the Indiana Jones style journalist Theodore Morde who emerged from the jungle in 1940 with a horde of fascinating objects and a story of finding the fabled White City, there had been nothing to substantiate the legend. Morde committed suicide shortly after returning from his adventures, taking his secrets with him.

Had he been cursed by the Monkey God?

The team focused in on one valley that was isolated and difficult to access easily on foot. They were going to bring new technology to the search by borrowing what is called a lidar machine. It shoots thousands of lasers at the jungle floor from a plane. It records the reflections that bounce off the objects on the ground. The software eliminates leaves, trees, and any other objects that are not part of, hopefully, the man made structures hidden beneath the canopy.

See, the problem was the lidar mapping found not one large site of manmade structures, but two. The irrational feeling that they didn’t deserve these finds because they didn’t outfit an overland mission that went blindly slashing through the jungle hoping to stumble upon something interesting, and the fact they didn’t lose about a third of their party to disease, snakebit, and jaguar attack in the process, is frankly ludicrous.

I do have to admit it does take some of the romance out of the whole swashbuckling archaeologist image that I grew up with. The cities were still there unmolested because no one had been able to penetrate the jungle effectively to find them.

Despite being able to drop into the site with a helicopter, and despite having better gear than what most explorers can haul into the jungle in the traditional overland expedition, the group still experienced difficulties with, to name a few, sand fleas, torrential rain, and snakes. Let me share a bit about one particular snake that kept turning up over and over again in the ruins of this civilization.

”The fer-de-lance, he said, is known in these parts as the barba amarilla (Yellow Beard). Herpetologists consider it the ultimate pit viper. It kills more people in the New World than any other snake. It comes out at night and is attracted to people and activity. It is aggressive, irritable, and fast. Its fangs have been observed to squirt venom for more than six feet, and they can penetrate even the thickest leather boot. Sometimes it will strike and then pursue and strike again. It often leaps upward as it strikes, hitting above the knee. The venom is deadly; if it doesn’t kill you outright through a brain hemorrhage, it may very well kill you later through sepsis. If you survive, the limb that was struck often has to be amputated, due to the necrotizing nature of the poison.”

*Shudder* #reason number one why I don’t go into the Honduran jungle.

So why did this civilization abruptly disappear at around 1500? Preston pulls together some pretty good theories regarding that event. Some are based on the greed of the rulers doing to their civilization the same thing that the rich and powerful are currently doing to the United States. Unmitigated greed makes even the most robust economies vulnerable to a similar collapse. The celebrated author of Guns, Germs, and Steel, Jared Diamond, has some wonderful examples, and Preston shares that wisdom with us, as well. The one that I found most interesting points to a celebrated event that happened in 1492 when Christopher Columbus “discovered” America.

The foreigners came and ”withered the flowers.”

Preston includes a wonderful chart that show the catastrophic effect of native populations making contact with the disease ridden crews of the Columbus exploration mission. ”What would a 90 percent mortality rate mean to the survivors and their society? It does not just kill people; it annihilates societies; it destroys languages, religions, histories, and cultures. It chokes off the transmission of knowledge from one generation to the next. The survivors are deprived of that vital human connection to their past; they are robbed of their stories, their music and dance, their spiritual practices and beliefs--they are stripped of their very identity.”

There is no proof that the diseases that killed so much of the indigenous population of the Americas was also the culprit that killed the civilization of the Monkey God, but the timing does make it a valid consideration. It was unavoidable that the Old World would meet the New World, so it was just more a matter of when.

The Monkey God expedition members returned to their regular life, relieved that they did not come down with any major diseases; the bites and rashes that they all suffered from disappeared, but then weeks later over half the group had a sore appear that would not heal. It became a miniature volcano. After much deliberation by doctors and contagious disease specialists, they determined that they had come down with leishmaniasis. Among the half that came down with this frankly disgusting and alarmingly difficult disease to contain was Douglas Preston. It is called white leprosy if that gives you any indication of what it does to the body once it gains enough control of your immune system.

The curse of the Monkey god? 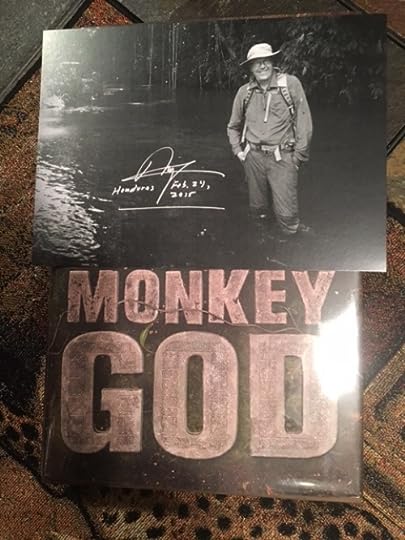 My signed copy of the book also came with a signed postcard of the author in the mosquitia jungle. Ephemeria is always fun for a collector.

I just finished reading The Lost City of Z, set in the Amazon, a few days ago, and it seemed a perfect pairing to read a similar book about another lost city further north in Central America. Any thoughts of chucking my rather pedestrian job as circulation manager/owner of a farm publication and joining a jungle expedition have been firmly squashed like a blood bloated flea beneath the tread of a kevlar boot. Not to mention, even the thought of tangling with one of those damn Fer-De-Lance snakes makes me break out in hives. I am a firm believer in doing my jungle travelling from the safety of my favorite reading chair.

If you wish to see more of my most recent book and movie reviews, visit http://www.jeffreykeeten.com I also have a Facebook blogger page at: https://www.facebook.com/JeffreyKeeten

Posted by JEFFREYKEETEN at 10:17 AM