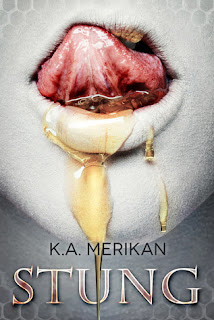 Twenty years into the zombie Plague

Victor is a man of delicate sensibilities, not fit to do backbreaking labour on a farm ran by the mob. Upon arrival in Honeyhill, he decides he needs an anchor, an alliance with one of the guards, if he wants to survive. That anchor comes in the form of Crunch, a hunky ex-sailor with a pair of tight leather trousers and a ruggedly handsome face.

But from day one, Victor knows he won’t last long with the hard physical work assigned to him and the torment he suffers at the hands of a sadistic guard. He needs to run, and his new alliance might prove to be a burden instead of solace.

If Crunch wants Honeyhill liberated, he needs to focus on his job, not on protecting Victor, one of many new arrivals on the farm. Distraction is the last thing he needs after months of undercover work. But it’s hard not to get seduced by Victor’s big brown eyes and fingertips that don’t know work. Hundreds of people depend on Crunch keeping his identity a secret, revealing it could be fatal for both him and Victor, and a failure of his mission.

Thankfully, Victor would never be dumb enough to try and escape through a forest that’s swarming with zombies. Would he?


So much promise, so disappointing.

London in the early 20th century, zombies, a prisoner/guard romance, a labor camp ruled by a powerful family, and sweet, sweet honey. What’s not to love?

The story starts out with Victor, a young singer, and other prisoners being transported by cattle car to the Dal family’s work camp, known as Honeyhill, where they will serve their sentences. Since Victor is blindfolded and hands bound behind his back, he has no idea where he is going.

“Suddenly, the struggle to raise above the others was gone as the wagon filled with cool air and the crowd moved, carrying Victor with it. He frantically clutched at the fabric of someone’s skirt, but the stream of people came to an abrupt stop with a loud bang that made Victor’s ears ring. The air filled with a new smell, smoky, a bit like fireworks.”


Besides the wrong word usage here, how in the world did Victor manage to clutch at someone’s skirt while his hands were tied behind his back?

Sadly, there were many instances of odd word choices and awkward sentences which distracted me from the story.

Right off the bat, Victor is a very unlikable character. Before he’s even out of his bonds, he’s already making eyes at an attractive guard named Crunch. He’s desperate, lonely and hungry and wants to ally himself with someone who has influence and control over others. Unfortunately, he has not given any thought whatsoever to his dire circumstances, which suddenly don’t seem so dire now that he’s found a love interest. Maybe it’s just me, but when I’m reading a prison story, I’d like for the incarcerated character to suffer a little and endure some hardship. Instead, Victor comes off as needy, manipulative, and immature.

Crunch was a far more interesting character. Unlike the other prison guards, he has an agenda of his own. While working to bring his own plans to fruition, he is also very protective of Victor and is charming when showing a bit of vulnerability and insecurity. Crunch feels lucky to have Victor, as Victor would likely not be interested in a man like him in the real world.

The best moments in the story for me were the creepy, tense scenes involving the evil guard, Sharp, the zombies, and the bees.

Considering that the story took place in 1907, there was little here that made the setting, clothing, mannerisms and dialogue feel authentic. Perhaps, with more world building, this could have been effective as a steampunk novel or alternate history. As it is, the background is flat and the romance unconvincing. I am happy that the authors ended the story realistically, without a schmoopy epilogue.
Posted by Nancy at 10:28 AM