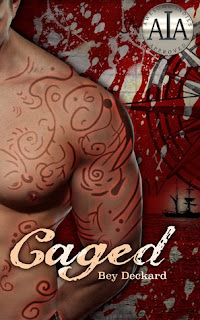 Sheltered and lonely, Jon's life changes drastically when a strange ship sails into the harbour of his small port town one day. Trapped between the possessive pirate captain and his murderous first mate, he must learn to adapt or he will lose himself completely. An epic tale of love, treachery and revelation, this first instalment of the Baal's Heart series brings you into the lives of three men so bound together by jealousy and lies that they must sail to the very ends of the earth to find forgiveness.

The story begins with the sad life of Jon. His mom died of the weeping plague and his dad died in a fall. Jon is frail and sickly, suffering from migraines and persistent bad dreams. Unsuitable for hard physical labor, Jon’s indifferent stepfather felt his unusual empathic abilities would come in handy to help determine the guilt or innocence of the prisoners locked up in the castle’s dungeon. Jon’s next task is to help discover who is responsible for the brutal murder of a call girl at a local brothel. Suffering from ill health, Jon takes some rest after his investigation and promptly gets kidnapped by the pirate Baltsaros, and his first mate, Tom, who were made aware of Jon’s talents. Baltsaros nurses Jon back to health and asks him to join their crew. Reluctant at first, Jon then sees this as a fresh start.

The three men grow closer, but all are deeply flawed characters with enough negative experiences in their lifetime that cause their relationship to be complicated, turbulent, and downright sexy.

Baltsaros and Tom are not quite what they seem, and Jon learns quickly that lies roll off the captain’s tongue just as easily as his knife shreds flesh. As Jon begins to spend more time with the captain, Tom’s anger and jealousy is aroused.

I thoroughly enjoyed spending time with these three men as they fought, loved and hurt. Their many adventures, the steamy sex, and the memorable secondary characters made this story a joy to read. I especially loved the badass Katherine, whose relationship to Jon was almost sisterly and I even liked Baltsaros’ ex-wife, Abetha, who went through changes of her own. Jon’s growth throughout the story was very convincing and well portrayed. He’s a solid character with the right mix of strength and compassion that brings all three men together.

The story was very well paced with a minimum of errors, and was a satisfying length. The historical setting was vivid and realistic and the dialogue flowed naturally.

I’m definitely on board for the next adventure!
Posted by Nancy at 9:20 PM