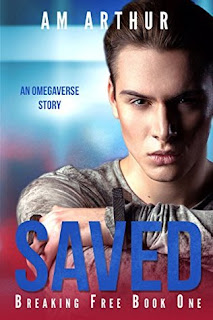 A.M. Arthur
Briggs-King Books
Reviewed by Nancy
3 out of 5 stars


He didn’t want an alpha to save him, but fate had other ideas…

Braun Etting was raised to know his place as an omega by his alpha father’s cruel words and fast fists, and he expects nothing but violence from the alpha who may one day mate him. His older brother Kell mated a cruel alpha who abuses him daily, and Braun is terrified of that seemingly inevitable future. When Braun’s father dies in a car crash, leaving Braun an orphan, he’s sent to a halfway house for omegas. But on his fourth night there, he witnesses a horrifying crime that sends him fleeing to the streets alone—and edging into his first heat.

Tarek Bloom is settled in his workaholic, single lifestyle, even if it is somewhat embarrassing to be a twenty-eight year-old unmated alpha. He enjoys his job as a constable, helping people and solving problems, so he isn’t prepared for his life to flip upside-down when he walks into his beta friend Dex’s apartment to help with “a problem.”

The problem turns out to be an unmated, nearly in-heat omega orphan who Dex and his husband rescued off the street last night. The even bigger problem is that Tarek feels the mating bond for this terrified omega immediately—and he’s pretty sure the omega feels it, too. But Braun hates alphas as a general rule, and no way is he giving in to the bond. All mating leads to is violence and suffering, so no thank you. But Tarek’s gentle kindness slips under Braun’s emotional shields, and Braun begins to want. To dream. All Braun has ever known is violent alphas, but Tarek is determined to make Braun trust him—and to trust in the idea of their happily ever after.

Braun Etting is a young Omega living in an alternate version of the United States where no females and three classes of males exist – Alphas, Betas and Omegas. Alphas are the most powerful in physical, economic and social spheres. In order to reproduce, an Alpha must mate with an Omega while he is in heat and at his most fertile. Betas enjoy much of the same rights as Alphas, but they are unable to reproduce. Omegas are the nurturing parents, valued only for their ability to bring more Alphas into the world.

“Only an alpha/omega coupling could create children, and alphas were the top prize. The biggest earners, the CEO’s, the inventors and the powerful. It was considered an honor to be omegin to an alpha offspring, and doubly so to birth two. Only one omegin in history had ever given birth to four alpha children, and he had a small marble bust in his honor at the Museum of Natural History.”

In this world, Omegas are treated as third-class citizens. They are unable to inherit property and unable to drive, unless they are mated and then only with their Alpha’s permission. Because the laws disfavor Omegas, they are vulnerable and subject to the whims of cruel Alphas.

When Braun’s abusive Alpha father dies in a car crash, Braun is sent to a halfway house for his own safety as he’s approaching his first heat.

This story explores the injustices and cruelty of this system, Braun’s deep distrust of Alphas and the infinite patience of his future mate, Tarek Bloom, a forward-thinking constable, and a sweet, likable Alpha. It was easy reading, compelling enough, and comfortably unchallenging, perfect for recovering from a bout of bronchitis. Unfortunately, it was also bland and derivative while I was looking for something more thought-provoking and intense.

While I enjoyed the setting, the tension, and the developing romance, I would have liked more nuanced characters, particularly the villains. Tarek was far too perfect and not at all alpha-like. Though he loved and supported Braun, I found him too indulgent and Braun too childish and petulant. I enjoyed the secondary characters, Serge and Dex, quite a bit more.

The events surrounding Braun’s brother, Kell, captured my interest, but I’m not sure if I plan to continue this series.
Posted by Nancy at 2:56 PM