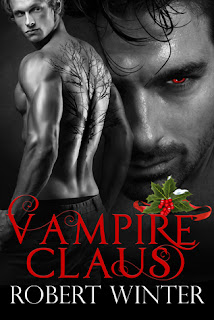 
’Twas the night before Christmas, but what’s stirring is a little more dangerous than a mouse.

Taviano is nearly two hundred years old and never wakes in the same place twice. Weary and jaded, the vampire still indulges in memories of childhood Christmases in Naples. He lingers in shadow, spying on mortals as they enjoy the holiday.

When Taviano spots a handsome young man in Boston loaded down with presents and about to be mugged, he can’t help but intervene. Soon he’s talking to joyous, naïve, strong-willed and funny Paul, a short-order cook who raised funds to buy Christmas presents for LGBTQ children. Before he knows what’s happened, Taviano is wrapped up in Paul’s arms and then in his scheme to get the presents delivered by Christmas morning.

A vampire turned into a Christmas elf… What could go wrong?

Vampire Claus is a 30,000-word standalone gay romance about a lonely vampire and a fearless mortal with no instinct for self-preservation. A heartwarming ending, no cliffhanger, and a young man who discovers he has a thing for fangs. Isn’t that what Christmas is all about?

Taviano was just 22 when he was turned into a vampire nearly 200 years ago. Having spent many years wandering, the lonely, nomadic vampire has decided to observe the city of Boston from the top of St. Stephen’s. The evening mass, the snowfall, and the Christmas trees seen through apartment windows, all make Taviano long for his childhood in Naples, Italy.

With his human life now over, Taviano skulks around in the dark, taking nourishment from the dregs of society. Over the years, Taviano has learned that he doesn’t have to kill his victims in order to satisfy the bloodbeast that lives within him. Though he still believes he’s a monster, his human feelings and memories remain intact.

It takes a near mugging and an encounter with a bright, compassionate young man named Paul to help Taviano recover his humanity, use his powers to help the less fortunate, and discover he is not the monster he’s always believed himself to be.

I loved the warmth, the strong connection and the steamy love scenes between Paul and Taviano. I enjoyed the glimpses of Taviano’s past and the fact that Taviano’s bloodbeast has his own underlying motives.

As much as I loved Paul’s kind spirit, his excessive use of slang drove me nuts.

This tender and funny romance is full of surprises and Christmas joy, with just enough danger and tension to keep it from feeling like a Hallmark movie.

I thoroughly enjoyed it and would definitely read another story with these two as long as Paul learns some proper English!
Posted by Nancy at 3:12 PM