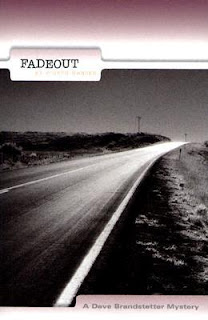 
Fadeout is the first of Joseph Hansen's twelve classic mysteries featuring rugged Dave Brandstetter, an insurance investigator who is contentedly gay. When entertainer Fox Olson's car plunges off a bridge in a storm, a death claim is filed, but where is Olson's body? As Brandstetter questions family, fans, and detractors, he grows certain Olson is still alive and that Dave must find him before the would-be killer does. Suspenseful and wry, shrewd and deeply felt, Fadeout remains as fresh today as when it startled readers more than thirty years ago.

It was a real pleasure getting to know Dave Brandstetter. Though this series has been on my radar for a while, knowing this first book was published in 1970 put me off reading. Many of the stories I’ve read from the 70’s and 80’s featuring gay characters have ended tragically or portrayed their lives unfairly.

Dave Brandstetter is an insurance investigator working for his father’s company and investigating the death of entertainer Fox Olson. He’s also grieving the loss of his longtime partner, Rod, who died of cancer.

As the case unfolds, we also get a glimpse of Dave’s life with Rod, his relationship with his father, and his dedication to his job as he attempts to solve a complicated case. Unfortunately, an insurance claim cannot be paid out until a body is found. As Dave spends time interviewing the Olson family members and gathering evidence, he comes to the conclusion that Fox is still alive.

Joseph Hansen’s writing is terse and to the point. Though it’s not a style that will appeal to every reader, it works well with this story, giving it a realistic and unsentimental feel. The short sentences helped move the story along at a brisk pace, yet there was enough substance to make me feel very deeply for the characters. There is an undercurrent of sadness throughout that didn’t move me to tears, but left me with a very heavy, depressed feeling.

“It was only remembering the good times that kept you from taking the knife from the kitchen drawer and, holding it so, tightly in your fist, on the bed, naked to no purpose except that that was how you came into the world and how your best moments in the world had been spent – holding it so, roll onto the blade, slowly, so that it slid like love between your ribs and into that stupidly pumping muscle in your chest that kept you regretting.”


Dave Brandstetter is a wonderfully refreshing character. I very much look forward to accompanying him on new cases and hope he finds love again.
Posted by Nancy at 3:10 PM