Since time out of mind, wrestling was always part of my life.  Some of my dimmest memories are sitting on the floor while my dad watched Wrestling at the Chase on KPLR every Sunday morning.  Watching Randy Savage cheat to beat Tito Santana for the Intercontinental title was what eventually made the wrestling bug bite me.  For years, watching wrestling was my favorite part of the weekend.  Once we got cable when I was in my teens, I was a terminal case.  Or so I thought.

Years passed, occupied by the British Bulldogs, Ricky Steamboat, Bret Hart, Curt Hennig, and many more.  I played Champions of the Galaxy religiously, as well as any wrestling video game I could get my hands on.  The rise of the cruiserweights changed wrestling forever.  While I was a diehard WWF fan, I couldn't deny the thrill of watching the smaller guys compete.  Ultimo Dragon, Eddie Guerrero, Chris Benoit, and Dean Malenko lead to me watching both Monday night shows simultaneously on side by side TVs in my parents' basement.  I saw the first Hell in the Cell match live at the Kiel Center and drove three hours each way to see the second last show of the original ECW in Poplar Bluff.  I saw The Rock win the WWF Heavyweight title for the first time and was in attendance at the somber RAW the night after Owen Hart died.  I wish I still had the ticket stubs.

Once the Monday Night Wars ended and both ECW and WCW were wiped out, my interest started to wane.  The job was getting in the way and wrestling seemed to be a lot more talk than I liked, although the first year of Ring of Honor kept the flame going a while longer.  My friends that also watched wrestling were drifting away.  Couple that with two of my favorites dying in the space of two years, Chris Benoit and Eddie Guerrero, and wrestling faded into the background for a while.

Finally, after a drought lasting almost a decade, wrestling started worming its way back into my life, like Damien on a hapless victim of a Jake Roberts DDT.  A co-worker of my wife was a backyard wrestler and we went to one of his shows.  It wasn’t great, although the Vortex knew what he was doing, but it got me thinking about wrestling again.

A couple weeks later, I saw NXT was coming to town and the tickets were cheap. I grabbed the Vortex and had an enjoyable evening but it wasn’t enough. Nor was the WLW show where we met Vader a few weeks later. 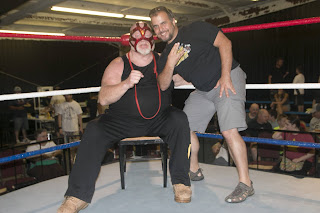 Glory Pro had already run a couple shows at that point and they were bringing in some bigger name indy guys to work with the local wrestlers.  The first Glory Pro show I went to featured Michael Elgin vs. Cody Rhodes and Naomichi Marufuji vs. Dijak.  My rationale was that even if the rest of the show was crap, how often does Marufuji come to the greater St. Louis area?

Not only did Glory Pro hook me, I swallowed the hook all the way down to my asshole, as my dad would say.  While the bigger names drew me in, it was the other guys that captured my attention.  Since then, I’ve been to every Glory Pro show and bought every DVD, along with some shirts.

I’ve seen Curt Stallion go from being an underdog to a crowd favorite to a cowardly heel.  I’ve seen Jake Something climb the ladder to be Glory Pro champ.  I’ve seen Stephen Wolf go from being a substitute for DJZ to being part of the biggest angle in the company.  Not to mention Jake Parnell and Gary Jay brutalizing each other, Tyler Matrix’s chest chopped into hamburger, Davey Vega getting pounced through the ropes to the outside by T-Money, Hakim Zane becoming a contender, C-Lo Banks being the best referee in the business, and the whole slew of Indy names who have come through Glory Pro in the last year.

Funny how I don’t want to commit to a three hour wrestling show on TV but I’ll drive an hour each way on a Sunday afternoon to sit on an uncomfortable steel chair for five or six hours to watch wrestling in a crowded legion hall.  The appeal indy wrestling holds for me is a lot like the preference I have for going to smaller clubs to see bands.  There's an intimacy there, the performers are accessible, and you feel like your presence makes a difference, a far cry from a 20,000 seat arena.  I'd much rather risk having Cole Radrick backdropped into my lap than watch the WWE flavor of the month anyway.

And that’s it, I guess.  I’m looking forward to more Glory Pro events this year and I’ve got tickets to the steel cage showdown between Gary Jay and Jake Parnell in Mattoon for Zero One USA in May.  It’s a great time to be a wrestling fan.