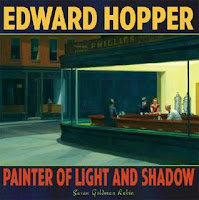 This captivating biography of the celebrated American painter Edward Hopper follows his youth, includes information on his education, and chronicles his journeys to Paris and his settling down in Greenwich Village to pursue his artwork. The book documents his career as a commercial artist (how he first earned a living) as well as his eventual success as a great American painter. Among the artwork included are NIGHTHAWKS, CAPE COD EVENING, and HOUSE BY THE RAILROAD. A comparison is made to other artists of the period such as O'Keeffe, Pollock, and Marin to round out this unique offering.


“If you could say it in words, there’d be no reason to paint.”
― Edward Hopper


When I requested this from the library, I was expecting an oversized coffee-table art book, not a 48-page book written for young readers.

I dove in anyway, and found out that good writing is good writing, whether it is for children or adults.

Even though I probably wouldn’t hang Edward Hopper’s paintings in my living room, they are deeply affecting. I love them for their realism, the vivid and unsentimental portrayals of American urban and rural life, and characters that are so serious, gloomy and reflective that I’d like to reach into the painting and learn what they are thinking.

This book features Hopper’s early paintings and portraits, his etchings, and the later work that finally gained him real recognition, when he was in his 40’s. In between the pictures and photos, the reader learns about the artist’s life – his family, friendships, his struggles and success.

A quick and enjoyable read.
Posted by Nancy at 10:22 AM