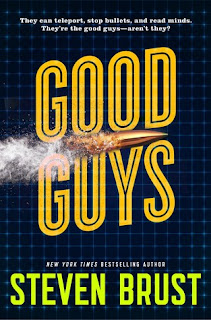 Steven Brust's "Good Guys" is a mashup of the private investigation fantasy subgenre, a subgenre that is right in my wheelhouse. Brust is an old pro, the author of the famous "Vlad Taltos" https://www.tor.com/2017/10/17/an-appreciation-of-the-vlad-taltos-novels-by-steven-brust/novels, who has published 30 novels. He knows how to write. This book has a cool sort of vibe, kind of an old style detective story. Its stripped down of a lot of unnecessary chatter. Kind of a spare Dashiel Hammett style but with all kinds of Brustian flourishes, including a group doing the investigation, a female Schwartznegger and no female love interest. So while it's grounded in classic detective mode, Brust dots the prose and story with his own style. It works very well as a detective novel, but at the same time, Brust has a monologue with the readers, do we think the investigators are really working for the right side? Keep that in the back of your mind as you read it.

We first meet the team, Donovan Longfellow, aka Laughing Boy, Marci, the mage, and Susan, aka Hippie Girl, the muscle as they investigate how a man was has been killed in broad daylight in a restaurant and no one saw a thing. They all work for the "Foundation". Donovan reports to Becker, his handler in the Foundation that Marci thinks a magical stop motion spell of some kind was used to kill the victim. The Foundation, seems to be run like a business. Donovan works for a field unit that investigates the use of magic in the field.

Brust does not use big information drops to explains things. Rather as part of the story little dollops of information are revealed merely as part of the story. So when Becker suspects that there might have been a magical device used, he goes to the Foundation's Artifacts department to have someone do research. It seems Donovan's job, in part is to stop the leaking of knowledge of magic to the public.

But now a man has died of a mysterious heart attack, and when the team investigates, they are ambushed by a gunman. Hippie Chick disables the gunman. So the killer seems to be trying to stop any investigation. But Donovan just lets the man go after questioning him, as he is merely a hired gun.

It seems the killing is tied to the Mystici, another magical organization. Donovan knows of the Mystici, who also have magical employees, but they are not nice people. Donovan owes the Foundation his life so he works for them, and he likes to think they are the good guys. As Hippie Chick explains, they pay us so little money we must be the good guys.

And Donovan and his team are still  being confronted by the killer or his associates in worse and worse ways.

So who really are the bad guys here. Its a gray world out there.

It's a conundrum that Brust leaves for us to figure out. But I like Donovan's style, and when the real bad guys hurt the good guys, an eye for an eye still passes for justice in my book.
Posted by Jeffrey Wendler at 11:52 AM