THE LIGHTKEEPERS BY ABBY GENI

The Lightkeepers by Abby Geni
My rating: 5 of 5 stars

”There is a wonderful violence to the act of photography. The camera is a potent thing, slicing an image away from the landscape and pinning it to a sheet of film. When I choose a segment of horizon to capture, I might as well be an elephant seal hunting an octopus. The shutter clicks. Every boulder, wave, and curl of cloud included in the snapshot is severed irrevocably from what is not included. The frame is as sharp as a knife. The image is ripped from the surface of the world.” 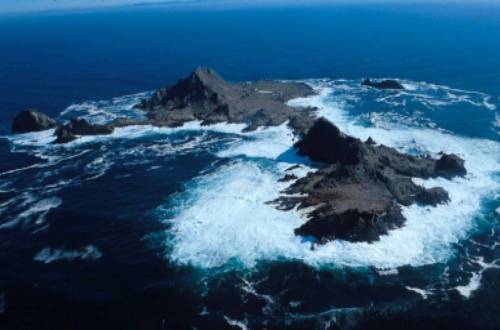 Miranda has pulled every string available, applied for all the grants, and finally receives an invite to join the scientists already ensconced in the sanctuary on the Farallon Islands. These islands are so small and so close to sea level that if the ocean rises half an inch they will disappear forever. The scientists are there to study the birds, the whales, the seals, and the sharks that all use these islands to battle for mates, to feed, to reproduce, and raise their young.

The scientists are there to record and not interfere with the workings of nature. They adhere to a prime directive that reminds me of the same command that was regularly spouted by the crew of the Enterprise. ”Star Trek, the Prime Directive (also known as Starfleet General Order 1 or General Order 1) is a guiding principle of the United Federation of Planets prohibiting the protagonists from interfering with the internal development of alien civilizations.” If a baby seal is toddling off to certain death, all you can do is watch it die.

The scientists call her Melissa, Mel, Mouse Girl, really anything but her real name. She doesn’t correct them. Being someone else for a while is just fine with her. She writes letters to her dead mother. She gives her cameras names as if they were children or pets. She has been running from any permanence in her life. Mortgages, relationships, children, picket fences, car payments are foreign concepts to her. She wants to be able to leave anywhere at a moments notice and head for somewhere else that she can capture images she has never seen before with her camera.

”Your death made me into a nature photographer.

I was always going to be an artist. There was never any question about that. I need to take pictures of the world around me the way a whale needs to come up for air. For as long as I can remember, I have been driven by beauty. I am talented; I don’t mind saying it. Photography was a given. Nature was the wild card.”

It is not that Miranda is unfriendly. She just doesn’t put any work into developing friendships. Friends become weights that can potentially keep her anchored to the Earth. The constant presence of her mother’s ghost is, in many ways, all consuming. When one of the scientists tells her about the ghost that lives in her quarters, Miranda is not scared, nor is she skeptical. ”’I believe you,’ I said. ‘I believe in ghosts.’”

The ghost of her dead mother is like an ethereal talisman. Something she doesn’t have to hold anywhere but in her mind.

Everything is going great. She is fitting in well enough with everyone. She knows where she stands in the pecking order. Everyone helps everyone else with their projects. She is capturing some amazing images.

And then a late night assault is committed.

This leads to a suspicious death, which leads to an unravelling of the symbiotic relationships they have achieved. Trust has been breached. ”In truth, there were a hundred ways to die on the islands. It was amazing that we were not all six feet under--lost to the wind, the ocean, and the dreadful, human capacity for misadventure.” The island is trying to kill them, and now no one is sure whom they can trust among the people they must trust to survive. 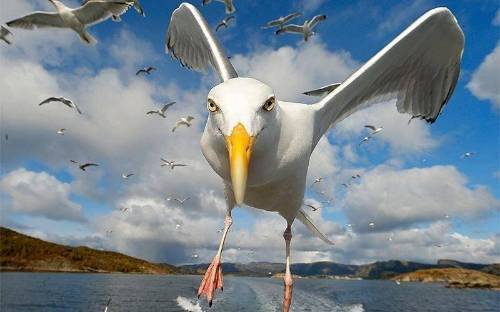 The most dangerous part of the island are the kamikaze gulls. ”But the gulls are the worst. They kill for food. They kill for pleasure. They kill for no good reason. They are expert assassins. They soar around the islands with bloody beaks and a mad glint in their eyes.” When Miranda is first pecked in the head, I can’t help thinking about the lovely Tippi Hedren, sitting in that small boat on the water being dive bombed by gulls in the Hitchcock film The Birds.

No, thank you. I would not be able to adhere to the Prime Directive. I’d be carrying around a blood crusted bat, waiting for the next dive bombing gull assassin.

One of the things I became aware of while I was reading this book is the powerful thirst I have for nature writing. I read a lot of Edward Abbey, Charles Bowden, and others as I was going to college in Tucson, but I haven’t really pursued the genre of nature or nature fiction much since I left the desert. I recently read Bearskin, which is set in another nature preserve in Virginia, and enjoyed it immensely. Fortunately for me and for you, Abby Geni has a new book coming out September 4th, 2018, called The Wildlands . She also has a collection of short stories called The Last Animal, which I also intend to read. Geni describes nature in vivid detail. I was transported to this wind swept, bird shit splattered, rain battered, gorgeous island. I settled in...well...not with the gulls, *shiver*, but with this dedicated crew of people intent on doing everything they can to advance our knowledge of the mystical world of nature.

”Perhaps there were only two kinds of people in the world--the takers and the watchers--the plunderers and the protectors--the eggers and the lightkeepers.”

Posted by JEFFREYKEETEN at 11:46 AM