The Bonds of Love 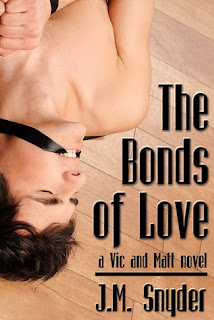 J.M. Snyder
JMS Books
Reviewed by Nancy
5 out of 5 stars


Vic Braunson has a special kind of problem -- his lover, Matt diLorenzo, somehow imbues him with enhanced superpowers every time they have sex. It's something Vic has learned to live with in the years they've been together, and something he won't let stand in the way of their relationship. Matt hates the powers, particularly when they put Vic in danger, but what can they do?

When Vic stops an armed robbery at a local convenience store, his picture appears in the morning paper. Later that day, Matt gets a phone call at work from Jordan Dubrowski, a guy he knew in high school. Jordan was his first, in every way -- it was through him that Matt discovered his ability to transfer superpowers to his lovers. Jordan had a taste of those powers, and after reading about Vic's role in the hold up, he's decided he wants them back.

But Matt is in love, and Vic won't let him go without a fight. Still, Jordan will stop at nothing to get what he thinks rightly belongs to him.

In this third story of the Powers of Love series, Vic and Matt have been together for three years. Vic has become more accustomed to and is better able to control the superpowers that Matt gives him every time they make love.

Vic puts them to good use during an armed robbery at a convenience store. He takes three bullets to the chest at point black range, the robber runs, Vic gets up, and both he and Matt are the topic of the morning news.

Vic’s pesky co-worker, Kyle, who was Matt’s ex, has a new boyfriend and invites Vic and Matt to a cookout at his house. Vic wants nothing to do with it, but Matt wants to go, just to prove to Kyle that “Mr. Right” does exist and there is such a thing as true love. The last thing Matt needs is a blast from the past in the form of his first lover in high school, Jordan Dubrowski, who is now Kyle’s new boyfriend.

Jordan had a taste of Matt’s sexually transmitted superpowers when he found the ability to run like the wind and decided to join the high school track team.

The story takes a very dark turn when Jordan abducts Matt while he is at Kyle’s house retrieving his misplaced cell phone, ties him up, beats him, and proceeds to sexually torture Matt in order to collect the source of his power. Meanwhile, Vic is confused by violent and erotic images that Matt is sending him through his mind. With the help of Kendra, a police officer who suspects Vic is more than he appears to be, Vic finally finds Matt. The sexual torture scene left me very disturbed and unsettled, even though the story ends well for everyone. I would have liked to see Vic spend more time helping Matt recover from his ordeal and healing his wounded spirit and less in taking revenge on Jordan.


I adore the main characters, Vic and Matthew. Their emotions are intense and their love and devotion to each other is beautiful and heartwarming. Plus, the superpowers Vic gets from making love are fun, creative and imaginative, and sometimes troublesome to both men. The secondary characters are well developed. This is a really well written story that had my pulse pounding, made me happy, and broke my heart. I like the long length of the story that really gave me an opportunity to know Vic and Matt even better.