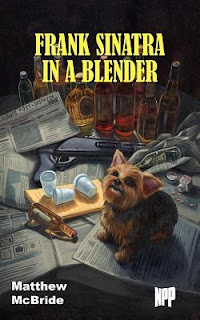 Reviewed By Brandon
5 out of 5 stars.

Frank Sinatra in a Blender.  Now THAT is an eye-catching title!  I was given the option to pick any novel from New Pulp Press in exchange for a review and when I read the title of Matthew McBride’s book, the choice was easy.

Nick Valentine is the definition of a raging alcoholic.  If there’s a bottle of booze within reach, you bet your ass he’s going to down it.  Same goes for painkillers, cocaine and any other drug he can get his hands on.  Nothing appears to be off limits.  If not for the fact that the narcotics helped him produce results, he’d certainly be lying face down in a ditch.  Nick is called upon by the St. Louis police to aid in the investigation of an apparent suicide by a credit union employee.  When said credit union is then the subject of a robbery, Nick gets caught up in the search for a missing duffel bag stuffed with cash.

If Guy Ritchie and Quentin Tarantino were capable of reproducing and they then raised their offspring on Frank Miller’s Sin City graphic novels, they would grow up to be Frank Sinatra in a Blender.  This novel defines that old saying, “moving at breakneck speed“.  I found myself having to re-read certain passages and pages because I was trying to keep up with just how fast the author was progressing the story.  If you’re expecting a lull in the action, you’re going to be disappointed.

I can’t stress enough how much I enjoyed this.  It’s one of the first times I can remember reading a novel and thinking, “Damn, I wish I could write something like this“.  Not only does the plot lend itself to so many twists and turns, the dialogue is a breeze to read.  Any detective novel can often go from good to great if the writer gives us a memorable character with a compelling inner monologue.  Sure, the mystery is the driving factor behind the novel but the central character is what turns one book into a long running series.  Let’s just hope McBride isn’t finished with Valentine just yet.

I’ve heard that New Pulp Press puts out some really great fiction and given how much I enjoyed this novel, I can certainly see myself visiting this publisher again.  Easy 5 stars.


Also posted at Every Read Thing.
Posted by Unknown at 6:15 AM