On being the supporting cast in someone else's life... 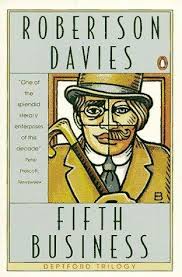 
Robertson Davies is one of my literary heroes. At a time in my youth when I had been engulfed with ‘Canadian Literature’ that was, in my humble opinion at the time at least, depressing, uninteresting, and decidedly parochial, here was a man who wrote stories with verve, humour, erudition and a view to the wider world. _Fifth Business_ is the first book of Davies’ Deptford trilogy, a series of books that centre around people from the fictional small town of Deptford, Ontario. Sounds parochial already, doesn’t it? But wait, there’s more. The main character, and narrator, of this tale is Dunstan Ramsay, a man who seems to have been destined to exist on the periphery of the life he is now looking back on. Sharp-tongued and intelligent, Ramsay has let himself fall into the role of school-teacher at an all-boy’s private school, unencumbered not only by a wife and children, but also by any truly close friends. The closest he has is Percy Boyd “Boy” Staunton, the golden boy of Deptford and frenemy of his youth. Boy is everything Ramsay is not: outgoing, active, popular and rich. Boy soon makes his mark in the wider world, parlaying the small fortune of his grasping father into the foundations of a business empire that certainly does nothing to lessen Boy’s innate pride and narcissism. Aside from their origins in a small Ontario town as part of the same generation, the two boys share something else, a link to the tragedy that occurred in the life of Mrs. Mary Dempster. On a fateful winter day, when Boy’s pride is goaded on by the shrewd antagonism of Ramsay, the then-pregnant Mrs. Dempster becomes the victim of a snowball hurled by Boy and meant for Ramsay which had a stone at its heart. This blow not only precipitates the early delivery of her son Paul, but also leads to a loss of cognitive functions that makes her, in the words of the people of Deptford, “simple”.

Forever keeping the facts secret, Ramsay is wracked by guilt over this event for the rest of his life (despite the fact that his was certainly more a sin of omission when compared to Boy’s culpability). It in fact becomes the shaping catalyst for his life and in large part determines the man he is to become. Ramsay takes upon himself the care of Mrs. Dempster (officially at the urging of his mother, who helped to deliver the woman’s son, but ultimately at the prodding of his own conscience) and she becomes for him a figure of signal importance. For Ramsay is convinced that there is something special about Mary Dempster, in fact he is certain that she is a saint. This is not only the result of his guilt, but due to the fact that Ramsay is certain that he has personally witnessed three miracles performed by her (one the resurrection of his apparently dead older brother). Ramsay becomes obsessed with saints and saintliness and his life’s work, his true passion, the study of these enigmatic figures in human history. He is not a particularly religious man, but he is not incredulous of the validity of religious experience either. This is where Davies is able to bring in one of his own favourite obsessions: Jungian archetypes and the mythical significance of history. The lens through which Ramsay sees the world is coloured by this interpretation and it is a fascinating one that informs all of Davies’ other books.

Dunstan Ramsay is an excellent narrator and his voice is pitch-perfect. He seems to contain the perfect balance of incisive observation with a somewhat deprecating self-awareness…though of course we probably shouldn’t take everything he says as gospel. Through Ramsay’s eyes we view the petty concerns and grotesqueries of small town life, things that, while petty (or perhaps *because* they are petty), are more than powerful enough to destroy a human life; we share in some of the horrors of the First World War as well as the ennobling elements of life that can overcome such things; and we witness the ways in which, sometimes unbeknownst to us, our lives are intertwined with those of everyone we meet, no matter how disconnected and solitary we think we are.

_Fifth Business_ isn’t my favourite book by Davies, but it’s a very good one and is an excellent introduction to the kind of writing you’ll experience if you choose to try him out. Not only was Davies a learned man, able to convey his learning in his books without sounding like a school-teacher or a man with a mission to convert (even though he was, perhaps,  both things), but he was also a very accomplished writer:

I know flattery when I hear it; but I do not often hear it. Furthermore, there is good flattery and bad; this was from the best cask. And what sort of woman was this who knew so odd a word as “hagiographer” in a language not her own? Nobody who was not a Bollandist had ever called me that before, yet it was a title I would not have exchanged to be called Lord of the Isles. Delightful prose! I must know more of this.


Delightful prose indeed. Davies’ novels seem to flow effortlessly, partly due to the charming and fluid voice he attains in them, and partly, I think, through his clever weaving of myth and symbol throughout what is, on the surface, a rather mundane plot. Ramsay’s life, especially in his eventually acknowledged role of “Fifth Business”, is not one that is full of monumental events or unexpected novelty, but it is a human life and one which Davies puts into the greater context not only of the lives that all of us lead, but of the mythic symbols and higher meanings that we look to in order to find greater significance in what we do and who we are.


Also posted at Goodreads
Posted by Terry at 12:01 PM