The king is dead...long live the king! 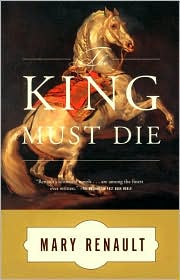 The King Must Die

The past, they say, is a foreign country. One might even go so far as to say that it is another world full of strange wonders and people who both fascinate and repel. I imagine that is why history so intrigues me and I definitely approach the subject with a heaping portion of romance as I in no way attempt to diminish the veneer and lustre which the intervening ages bring to previous eras. Despite this fascination I generally find myself of two minds when it comes to historical fiction. While the subject matter fascinates me and the promise of even vicariously visiting that foreign country, the past, is a powerfully attractive one I often find myself somewhat unimpressed by many of the books I have sampled in the genre which, for one reason or another, often fail to capture my interest. Sometimes I am critical of the anachronisms (real or perceived) that seem to litter these books as the writer attempts to make the past perhaps a bit too relatable to our present world. Other times I am simply unimpressed by mediocre writing (I imagine it is no more prevalent in this genre than any other, but somehow it particularly grates when I find it here). Then again, sometimes I am simply not interested in what turns out to be more a history lesson than a story with blood and life to it. I was glad therefore to have found Mary Renault’s _The King Must Die_ which proved to be both well-written, full of particular human interest, and displayed the wonder and strangeness of the past in all of its glory. I also consider it something of a return to the love affair I had in my youth with the Hellenic myths which seemed to fall to the wayside as I grew older and other interests crowded them out.

Renault takes as her subject the early Hellenic expansion among the Greek archipelago when the ancient chthonic mother-goddess religions of the autochthonous peoples (the “earthlings”) were being displaced by the more patriarchal sky-god religions of the invaders. The title of the book itself refers to the ancient tradition that the year-king married the goddess (or more accurately her avatar the high priestess) and would then be killed as a yearly sacrifice to the Great Mother in order to ensure the bounty of the harvest and safety of the people. Into this tradition she incorporates the story of Theseus and his rise to fame and power. The son of an unknown father and the daughter of the king of a tiny Hellenic kingdom, Theseus has grown up believing himself to be the son of the god Poseidon. Theseus comes to learn that some of his preconceptions about his birth may not be literally true, though he never loses the sense that there is a deep connection between himself and the Earth-shaker. I like how Renault handles this aspect of her story. The power of the gods and goddesses of the ancient religions permeates the story and is never simply disproved or denied, yet she also doesn’t make them explicit characters in the story and go fully into the realm of fantasy. There are indications of the ways in which these divinities interact with the world, and it is up to the characters (and the reader) to decide for themselves how to interpret these strange and seemingly coincidental events.

To make a long story short Theseus grows in knowledge and confidence and eventually leaves his tiny home in order to find his fortune, and his earthly father, in the wider world. His journeys take him across the wild and bandit-infested Isthmus of Corinth first to the goddess-ruled city of Eleusis and ultimately to Athens. From his early victories and society-changing actions Theseus is finally driven to the event that will cement his name in the history and myths of his people forever: the yearly tribute of youths from Athens to the kingdom of Minos in Crete. Again Renault does a superlative job of taking what is, on the face of it, an utterly fantastic story and bringing its details down to earth without divesting it of its magic and mythic allure. The Minotaur may not be a true half-man half-beast, but he is no less a fascinating power against which Theseus must stand. The bulk of the novel concentrates on the time Theseus spends in Crete at the labyrinthine court of Minos as leader of a team of bull-dancers. These bull-dancers hold a special place in the hierarchy of Crete, on the one hand they are slaves destined to die at the hand of the god’s creature, the bull; on the other they are sacred and popular athletes who, so long as they survive, are showered with praise, gifts, and glory and are an untouchable segment of the populace, forever kept apart.

All of the elements of the myth are here:  the brutal and savage Minotaur looming in the background, the decaying and decadent reign of the monarch known to the world as Minos, the labyrinth built by Daidalos through which Theseus must creep guided only by a thread, and the doomed love of the hero for the unfortunate maiden Ariadne, but they are all subtly transformed. Renault’s transmutation of them in some ways brings them closer to us as they become more plausibly human and understandable as ‘real’ events, but she does not go so far as to allow them to lose the lustre that gives to all true myths the shine and glory which make them everlasting. Of course this is a Greek tale and thus tragedy is a prevalent thread throughout. The tale ends as the first phase of Theseus’ rise and adventures are coming to a close and sets the stage for the final phase of his story in _The Bull from the Sea_ to which I look forward (with suitable fear and trembling on behalf of the man unfortunate enough to be the ‘hero’).


Also posted at Goodreads
Posted by Terry at 12:16 PM