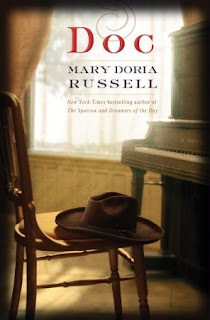 
Reviewed by Amanda
5 Out of 5 Stars

A youth in the South. An education in the North. Bred for life in the East. Trying not to die in the West.

This synopsis of the life of John Henry "Doc" Holliday is elegant in its simplicity and perhaps holds more truth about his life than the hundreds of thousands of words that have been written about him.

I will confess that my earliest exposure to Doc Holliday was Val Kilmer's excellent portrayal in Tombstone. I have probably watched that movie in its entirety no less than 15 times; however, I've always known that, as is true with so much history, it's a super-charged, testosterone fueled, balls out version of events that plays up the romanticism of the Old West and makes giants of common men in uncommon circumstances. Unlike so many movies and books about him, Doc by Mary Doria Russell is not interested in perpetuating the reputation of Doc Holliday as a cold-blooded killer and a ruthless gambler, but instead focuses on trying to restore humanity to a man whose world was broken by war and sickness and shaped by the luck of the draw.

Doc is not a biography, but instead a fictional account of Doc's life from birth up through his years in Dodge City, where Russell imagines the circumstances that would cement his friendship with the Earp brothers. Using the framework of Wyatt and Doc's friendship with the fictional John Horse Sanders and the mysterious circumstances of his death, Russell explores the lives of John Henry Holliday, dentist by day, gambler by night; his tempestuous and fiercely intelligent companion, Kate Harony; a reticent and doggedly honest Wyatt Earp; Mattie Blaylock, already ruined and addicted to laudanum when she enters Wyatt's life; the friendly and intelligent Morgan Earp; and the vain Bat Masterson. In doing so, she brings the society of Dodge City to life and vividly portrays a town at the edge of the American frontier where the law had no finer points other than "Don't shoot the customers." Lawmen like Wyatt Earp were expected to do little more than keep the drovers who came to Dodge at the end of a cattle drive from killing each other before they could spend the season's wages on whores, alcohol, and gambling. While Dodge prospered, there was a ruthless, mean edge to its economic principles.

Born to Georgian aristocracy, classically educated, trained as a dentist, raised for the life of a gentleman, and already diagnosed with tuberculosis, a town like Dodge should have consumed a man like Doc Holliday who seemed so ill-suited to a rough-and-tumble lifestyle. Instead, Doc's recognition of life as the ultimate gamble ("Bein' born is craps . . . How we live is poker") served well in equipping him with the ability to make the most of a poor hand. Suffering from a cleft palate that his uncle repaired once the baby became healthy enough, Doc was been born struggling to cling to whatever life chance would allow. This resilience, along with a sharp tongue and an intellectual's curiosity, helped sustain him during his exile West and enabled him to make a family of friends to substitute the one he longed for back East.

Russell also reminds us of the Doc Holliday that existed beneath the swagger and bravado--a man, little more than a boy, who knew he walked in death's shadow, but was determined to prevent death from claiming its prize too soon. The pain of Doc's circumstances, especially in a town where young men treated life so carelessly as they courted danger, is evident: "Certain that if he were to move at all--even slightly, even to speak--everything human in him would be lost to blind, bestial, ungovernable rage, John Henry Holiday sat silently while in the coldest, most analytical part of him, he thought, If I go mad one day, it will be at a moment like this. I will put a bullet through the lung of some healthy young idiot just to watch him suffocate. There you are, I'll tell him. That's what it's like to know your last breath is in your past. You won't ever get enough air again. From this moment until you die, it will only get worse and worse."

Doc is not a fast-paced book, but it is a beautiful one. Often funny, philosophical, and gritty, it honors the men and women at its core and removes them from the lofty heights of myth and returns them where they belong--firmly on the earth they walked not as titans, but as mortals.
Posted by Amanda at 11:25 AM