Against my basest male desires, I had to resist the urge to give this book a four star rating. I don’t really mean that this book was lacking in exactly what it was promising to deliver, it’s just probably not ethical (because apparently I think my GoodReads reviews are the epitome of my journalistic standards) to give this book another star just because I have a crush on the author. I mean, here we have a talented female author who is also a huge fan of any and everything noir and she looks like this: 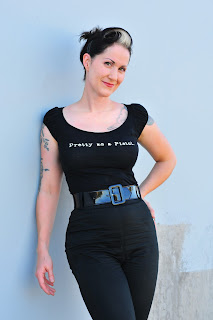 I am well aware from what I have read that Ms. Faust would eat me alive, but this will not deter me from thinking she is, like, so totally super cool and/or marrying her at a moment’s notice if she so wishes. In fact this is probably true for most pretty women with piercings and tattoos who also are really interested in crime fiction (sadly, I have yet to meet any in my own city.) I will gladly meet such a woman and proceed far too quickly to think she is the greatest person ever and will marry her.
I am a weak man and prone to bad decisions.


But enough about me, let’s talk about Christa Faust’s Money Shot—a fun, hard-boiled revenge tale starring the beautiful, and very capable, Angel Dare.
Let’s go ahead and get this out of the way: Angel Dare is not really Angel Dare’s name. This is the stage name she picked back before she took the adult film industry by storm. And now, over ten years later, she is something of what I’d guess you'd call a household name and is perfectly content with her name and identity Angel Dare. She owns and manages a successful talent agency that treats its adult-film actresses fairly and respectfully. She has a good number of close friends. She has a nice house that she sees as the pinnacle of all her endeavors and successes. This is America, and there are easily a million different ways to find your own personal dream of happiness—and Angel Dare has found hers.


But things go wrong very quickly (like in the first sentence) when Angel finds herself shot and left for dead in the trunk of a car. How did she get here? Well thankfully Angel spends the first thirty pages letting us play catch-up from point A to point B.
An old director friend calls up Angel one day for a last-minute shoot of a simple no-fuss-no-muss guy-on girl scene. Now angel is technically retired but she likes helping out an old friend. There are also two other important factors in the decision that are a little less noble. 1) Angel is reaching middle age and is starting to fret about a sudden decline in her sex appeal. 2) she hasn’t gotten laid in a while and (as Angel wonderfully states it) she totally has a woman boner for the male actor she will work with in the scene.


Ladies and gentlemen, meet the out-of-this world stud Jesse Black. He’s got it all: baby blue eyes, long and thick black hair, a body to die for, and the blessed endowment of the porn gods…you know what I mean. He’s the hot new talent on the adult industry scene and Angel is flattered when Jesse personally requests to work with Angel. It’s like a dirty little fantasy come true for Angel—that is until he punches her in the face, ties her up, tortures her, locks her in aforementioned trunk, and oh yeah, he shoots her a couple of times.
So why does poor Angel Dare have this happen to her? Well for one, men suck; and two, it turns out Jesse Black is involved with some nasty Eastern-European white slavers. Also there is a matter of a suitcase full of a lot of money that has gone missing. These scum bag gangsters have somehow gotten the idea that Angel knows where there money is. Unfortunately for Angel, she doesn’t. So they decide to go ahead and dispose of her.

Fortunately for Angel, Jesse is kind of a tit and does a very bad job of leaving Angel for dead. Unfortunately for the bad guys, Angel is not the kind of person you want pissed at you.


This doesn’t mean revenge is going to be an easy thing for Angel. The gangsters were also kind enough to leave a murder rap on her head so the police aren’t going to be too sympathetic to Angel’s plight. But like I said, Angel has some close friends, including the ex-cop turned adult actress bodyguard, Malloy. Pretty soon Malloy and Angel are on a race against time to find out where the missing money is and also to make sure that every single one of the bad guys end up a lot of dead.
This was a fun and fast-paced book, and also very refreshing. I have felt for a while now that the crime and mystery genre has been lacking in interesting female protagonists. It seems more often than not that most female protagonists in these kinds of books are often pretty bland and straight laced. So this was a book I had been meaning to read for a while. While I did really enjoy the book, I did not love it. There was a lot of strong characterization in this book, but I felt that Ms. Faust did not push the story as far as it could go.

There seemed to be a tug-of-war going on in the novel where the author couldn’t decide whether she wanted the book to just be over-the-top or if she wanted it to be a more personal drama. I opt that she should have gone for more of both (an example of this would be the excellent mystery novels by the writer James Crumley).

That being said, I am also aware that there is a sequel to this book—Choke Hold—and that many reviewers have described it as a strong improvement over the first. I will definitely check this one out at some point in the near future and hope to see much more work from Ms. Faust in the mystery/crime genre.

ALSO POSTED ON GOODREADS
Posted by Unknown at 7:19 PM