Theseus, the man who would be king 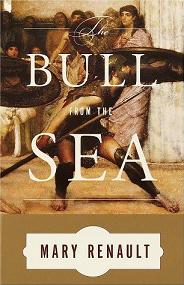 The Bull from the Sea

Mary Renault’s _The Bull from the Sea_ takes up where _The King Must Die_ left off and continues the legendary story of Theseus and his kingship of Attica. There are some differences between this volume and its predecessor, most notably in the fact that the scope of this tale is much broader. Whereas the first volume concentrated primarily on Theseus’ youth and time in the bull ring of Crete and covered the time involved in a fair amount of detail, this volume is much more a précis of many events, covering a much wider range of time. Important events and periods are singled out, however, and expanded upon with more than enough detail to satisfy. I never had the sense that the tale was in any way rushed or incomplete and the broader scope perhaps allowed for a more elegiac tone to the novel, which is appropriate given the ending to Theseus’ tale. This is a memoir giving the wider story of Theseus’ kingship and deeds after the defining moment of his youth has passed.

Even though this memoir comes from the hand (voice?) of Theseus himself and is often told very much in overview I was impressed with the way in which secondary characters came to life. For example with only a chapter seen from Theseus’ POV and the things he is able to glean from implication we learn a lot about the entire youth and development of his son Hippolytos. Theseus’ great friend Pirithoos, his wives Hippolyta and Phaedra and his other son Akama are also all very well depicted even when painted with minimal brush strokes.

Another thing that struck me with Renault’s Theseus saga (and this volume in particular) was the deft way in which many other legends and tales from ancient Greece were woven into the fabric of his tale without taking anything from the tale being told, but also without detracting from their own importance. These include the legend of the famous bard Orpheus, the tragedy of the king Oedipus, the existence of the Centaurs and the apparently contradictory traditions of both their training of the heirs of kings and almost bestial gluttony and lust, the tale of Jason’s quest for the Golden Fleece, and even echoes of the coming Trojan War in a cameo by the young hero Achilles. As with _The King Must Die_ Renault is able to retain the mythic stature of these stories while making them much more ‘realistic’.

For all of the many events that make up the career of Theseus Renault tells a tight tale, woven deftly with nary a thread left astray. We very much see him here as Theseus the King (as opposed to Theseus the wandering hero, though the latter is never wholly absent from his nature or actions) and we see him constantly trying to live according to the guiding principle of his life, learned in first trials of his youth: “To stand for the people before the gods, that is kingship. Power by itself is the bronze without the gold.”  Despite the fact that he is a heroic figure whose deeds may often seem larger than life he is also a man whose ultimate tragedy is born of the foibles of his own human nature. In the end Theseus comes to learn, perhaps too late, that all of his choices and actions, along with the fate he has willingly embraced, have a price: “Fate and will, will and fate, like earth and sky bringing forth the grain together; and which the bread tastes of, no man knows.” The taste may be bitter at the end, but the sweet was no less great and is ultimately not erased by his tale’s conclusion.

Also posted at Goodreads
Posted by Terry at 12:20 PM