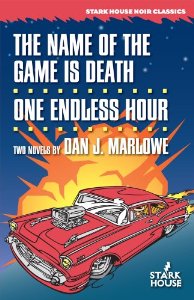 
His name might be Roy Martin; it might be Earl Drake; it might be Chet Arnold, or it might be something else altogether. In the end, we never know and it doesn't really matter. What counts is the fact that he's a classic pulp fiction criminal--a bank robber in this particular case--in a book that's one of the best examples of the genre.

Martin/Drake/Arnold is the creation of Dan J. Marlowe, a writer who began his career relatively late in life and whose career ended all too soon in 1977, when he contracted a mysterious case of amnesia and was no longer able to write. For a brief span, though, from the late 1950s through the mid-1970s, he produced a number of pulp novels, some of which he wrote alone and others which he wrote with a co-author.

The Name of the Game Is Death is generally considered to be his best book, and it's a terrific read--a lean story, stripped to the bone that pulls you in from the opening page and races through to the startling conclusion. It starts with a bank robbery in Phoenix that goes bad, although "Martin" and one of his partners manage to escape with $178,000--a pretty good haul in 1962.

But three people are dead, including the third robber and a couple of bank guards. Worse, from Martin's perspective, is the fact that he's been shot in the arm and can't travel. With their plans shot all to hell, Martin will lay low and attempt to heal while his remaining partner, Bunny, takes the loot to a small town in Florida. Martin will catch up when he can and in the meantime, Bunny will occasionally send him money to live on care of General Delivery.

Briefly, things go as planned, but then one day, there's no envelope at General Delivery on the scheduled day, and none appears thereafter. Martin trusts his partner implicitly, which means that something has gone badly wrong in Florida.

Once recovered from his wound, Martin makes his way cross country to Florida where he becomes Chet Arnold, a tree surgeon. Having established himself in the community, he begins searching for Bunny and the missing loot. Inevitably in a book of this sort, he will have to contend with brutal, crooked cops; sexy, treacherous dames and a host of other obstacles. But what sets this book apart from so many others of its day and genre is the skill that Marlowe brings to the effort. The plot is compelling; there's plenty of action; the characters are fully realized, and you once you start the book, you can't put the damned thing down until you reach the climax.

It's very unfortunate that Marlowe's career was cut so tragically short, and because his career was relatively brief, he's largely faded from view. But crime fiction fans owe a huge debt of gratitude to Charles Kelly who has done a great deal to resurrect Marlowe's reputation.

Kelly has recently written an excellent biography of Marlowe, Gunshots in Another Room: The Forgotten Life of Dan J. Marlowe, and he has provided an introduction to a new edition of The Name of the Game Is Death which has just been re-released by Stark House in a double volume alone with another Marlowe classic, One Endless Hour. As a result of Kelly's efforts Dan J. Marlowe is enjoying another moment in the sun, and those who love classic hard-boiled pulp fiction will certainly want to find the new Stark House edition of these books.
Posted by James L. Thane at 6:35 PM