It's not easy being a god 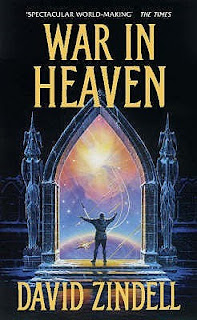 Reviewed by: Terry
4 out of 5 stars


David Zindell’s space opera books, that started with the stand-alone _Neverness_ and continued with his “Requiem for Homo Sapiens” trilogy (of which this volume is the conclusion), always scratch that itch I have for Dune-like space opera. You’ve got the baroque world-building of a far, far future of humanity in an interstellar diaspora that combines elements of medieval and pre-industrial societies with ‘magical’ technology and gleaming ships that fold space; you’ve got bizarre human enclaves (sometimes almost reminiscent of Jack Vance, though with less obvious caustic humour) so that societies of warrior-poets, pilot-mathematicians, scientist-philosophers, autist-savants, and priest-kings all rub shoulders in a bewildering and colourful throng; you’ve got philosophical ruminations on the purpose of life, the tragedy of love, and the power of hate; all-in-all its heady stuff that hits that sweet spot in my belly that little else seems able to satisfy.

I’m at a bit of a loss for how to appropriately review this book though. It’s the third book of a trilogy (the other two of which I have not reviewed) all of which are built upon the initial stand-alone book _Neverness_. I can’t say much about this volume’s plot without rehashing much of what came before and thus committing spoiler to the Nth degree. Perhaps plot-wise it is enough to say that our hero, Danlo wi Soli Ringess (the son of _Neverness_'s hero Mallory Ringess), has returned from his great quest into the Vild carrying not only tidings of hope, but also of possible doom for the cosmos. Not only is a rogue star-killer ship searching for the ancient homeworld of the Order of Mystic Mathematicians and Other Seekers of the Ineffable Flame in a quest of vengeance, but the very gods themselves (super entities of moon-sized brains and ‘bodies’ that stretch across solar systems) are at war with each other, some vying to destroy, others to save, the galaxy. To top it all off Danlo’s oldest and dearest friend (also his greatest and most dangerous enemy) has taken control of the Way of Ringess, the religion that worships Danlo’s father as a god, and threatens the balance of the universe with his own mad scheme. So far, so epic, right? Well, the book more or less lives up to this potential as we move into the final phase of the story that Zindell built up over two other volumes (three including the initial story of Mallory Ringess himself).

This final volume of the story reminded me most strongly of Herbert’s work in _Dune_. As in the Dune series there are many ruminations on a ‘Golden Path’ for humanity and the dangers of prescience when applied to human action (though Zindell seems to have a much more optimistic take on its uses than did Herbert). Also, like Herbert’s Muad’Dib, Zindell’s Danlo (and Mallory before him) partakes of the traits of both god and man. The travails of this power, along with the ability to turn the multitudes of humanity loose in a religious frenzy upon the galaxy, are examined in Zindell’s work no less than Herbert’s (though in ways that differ enough to make this an interesting examination instead of simply a rehash). This does mean, however, that there are often times when Zindell slips too far into his pseudo-philosophical/mystical ruminations (as Herbert did himself) as Danlo finds himself continuing his own personal quest to near-godhood. I imagine it’s hard to deal with these themes, especially within the grand scale of space opera, without falling into the trap of excessive explication and over-extended internal monologues from time to time, but be aware that they are here in case that kind of thing annoys you. All in all, though, the tension of the many threads of the story is held together by a fairly quick-paced plot and world-building that truly seeps out of the pages. There is more than enough tragedy in this series to sustain several epics, and the sheer scale of the possible (and actual) destruction on display screams “SPACE OPERA!” in flashing neon...but that’s a plus in this genre. There are times too, when Zindell’s creation of a pacifist hero, while interesting in itself, can grate on the nerves (for me at least). While Danlo’s devotion to the principle of ahimsa (“Never to kill or harm another, even in thought”) may be noble, the ends to which he is apparently willing to take this principle sometimes stretched my credulity…but then maybe I’m just a cynic. Still and all if you’re in the market for truly epic space opera that tackles trans-humanism, galaxy spanning star-faring, wars to end all wars, planetoid computers, and hints of man’s progress towards godhood (and yet still manages to ruminate on things at a truly human scale: tragedies of life and death, the intertwining elements of love and hate, and the conundrum of violence vs. pacifism) then crack open the first stand-alone volume, _Neverness_ and see what you think of the universe Zindell has created. If that wets your appetite then I would urge you to continue on with this truly kitten-squishing epic of galaxy spanning philosophical adventure.


Also posted at Goodreads
Posted by Terry at 7:51 AM