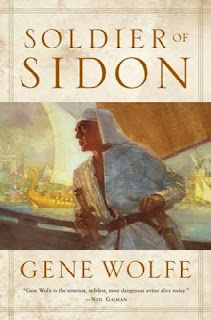 Reviewed by: Terry
4 out of 5 stars

Gene Wolfe’s third volume of the Soldier series is divorced from the first two in several ways. The most obvious is the fact that it was written 17 years after the last volume, leaving quite a cliffhanger for contemporary readers (and actually no indication that there would even be a sequel). The other is the fact that even in-story the events occur at a significant remove from those that transpired in _Soldier of the Mist_ and _Soldier of Arete_. As Sidon opens we find that Latro has been living back at home, apparently with his wife, for some time (though given that this is a Gene Wolfe book I’m not sure if I quite believe that everything is exactly as it appears) though his condition is no better than when last we saw him and he tends to sit despondently in front of his door where the word “Riverland” (aka Egypt) is written (apparently he believes that going to this distant country will enable him to heal himself…we’ve heard something similar before I think). Latro is visited by an old friend, the Persian ship captain Muslak who is one of the few remaining links to the previous two volumes, and his friend promptly decides to bring Latro with him as he just so happens to be taking a shipment of goods to the Nile delta.

What follows is an adventure similar to what we have already seen Latro undertake, though this time the setting is ancient Egypt and Nubia and the secondary cast of characters is different. In a nutshell Muslak’s ship is commandeered by the Persian satrap of Egypt to cruise down the Nile and discover anything that may be of use to him from the countries to the south. Travelling in this band are a Persian magi and his Egyptian priest-scribe, an Egyptian sorcerer-priest, two “singing girls” (aka temple prostitutes who become the “river wives” of Latro and Muslak), an Athenian wine-merchant, several eldritch familiars, and various sailors and soldiers. As before Latro is pulled in several directions by the machinations of the various gods and supernatural creatures he is able to see, as well as by the all-too human people who want to make use of him for their own ends. Aside from the new locale I have to admit that I didn’t notice a lot of difference between this volume and the others and little, if any, final resolution is forthcoming from Wolfe. Still, I enjoy being in Latro’s company and seeing the ancient world (both natural and supernatural) through his eyes.

I like the way, throughout the Soldier series, that Wolfe is able to make the gods into a real living and breathing element of the civilizations that spawned them. They don’t come across merely as archetypes or placeholders (though they do indeed serve those purposes, at least partially), but they are also not just humans with superpowers. There is something distinctly ‘other’ about them that seems equally tied to their roles as both stewards of particular elements of creation and embodiments of basic aspects of the human psyche. Within this ‘god-as-archetype’ role, however, they still retain distinct personalities that elevate them beyond being mere ciphers. The gods of Egypt seem different from those of Greece not only in their physical forms, but also in that they seem to have a less vested interest in Latro. I got the sense from the first two volumes that the Greek pantheon had a specific purpose in mind when they ‘recruited’ Latro as a pawn to their internecine fighting, but while the Egyptian gods are more than willing to make use of him, they seem to be doing so for much less personal reasons. Of course I still have no idea what exactly those reasons were for the Greek pantheon, so the jury’s still out on that one.

As in the other volumes Latro is once again led by prophecy to visit various temples along his path, this time following the Nile river to its source. Various gods and powers meet him along the way and help or hinder him as they see fit. He overcomes a variety of vicissitudes including enslavement, betrayal, and abandonment; he also meets an unexpected old friend in a time of great need, but ultimately ends this phase of his adventures perhaps worse off than he was when he started and on the verge of yet another seemingly hopeless quest. One hopes that this cliffhanger will be resolved in a subsequent volume and that the wait won’t be another 17 years.

Also posted at Goodreads
Posted by Terry at 7:20 AM