Magic in the Wild, Wild West 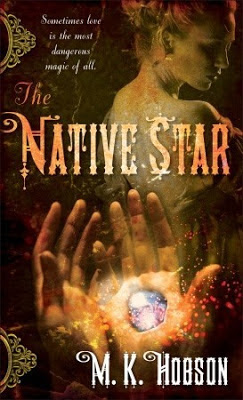 Take a pinch of the Wild West, a dollop of whimsy, just a dash of romance, and a heaping helping of magic and you apparently get the perfect summer read.

On the surface, The Native Star is fairly formulaic. There's the Austen-esque dynamic of the stubborn and headstrong (but always proper beneath it all) woman who finds herself at odds with a pompous and equally headstrong jerk (who remains, fundamentally, a gentleman beneath it all). I have to admit that I'm a sucker for this dynamic because nothing triggers my gag reflex quicker than a simpering and whiny heroine, unless it's the "here I come to save the day" uber-perfect hero. Circumstances arise that force these two into unwelcome proximity to one another for the duration of the novel and witty banter between crises ensues. This is pretty standard stuff and even the less sophisticated readers among us can probably make accurate predictions as to where this plot is headed, but . . .

. . . holy shit, was this fun! While the basic narrative is standard, the world building is delightful. Set in the west during the Reconstruction, the United States has always relied on magic to grease the wheels of commerce. There are three primary types of magic practitioners: sangrimancers (who rely on gruesome blood rituals to tap into their power), animancers ("earth" magicians who draw upon nature to heal), and credomancers (faith magicians who draw upon the beliefs of others to make the impossible, well, possible). There's much in-fighting amongst these magical traditions, as well as opposition to magic in the form of religious zealots and the increasing threat of science as a replacement for magic. Several reviews have labeled this as "steampunk," which is misleading as there are no gimmicky, steam-powered gizmos and gadgets. Everything is fueled by magic (as one reviewer said, this is "witchpunk"--a term that seems much more accurate). There are zombies, Native American holy women, murderous spirits, fantastic magical devices, as well as witches and warlocks of every stripe and color imaginable. There are quirky little details (my favorite being the idea of a "squink," a word created by the combination of the words "squid ink" and meaning to lessen the power of a credomancer by clouding his ability to believe in himself).

The Native Star is clever, witty, and intelligently written light reading when you just want to reconnect with the joy of a rollicking journey whose only destination is to enchantment. There are no deeper meanings, no pompous literary preening, no need to bust out the theory books to figure out what is up with the symbolism. It's just fun. And sometimes that's more than enough.
Posted by Amanda at 8:46 AM