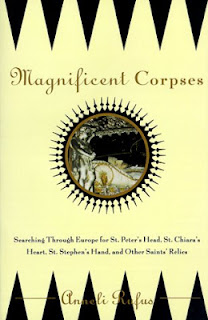 Holy relics -- the bodily remains of saints and other sacred figures -- were for centuries the most revered objects in the Western world, at center-stage in Europe's great churches and cathedrals. Today some relics have been shunted to side chapels and dark crypts, yet many continue to draw prayerful pilgrims, as they have for centuries, seeking solace, inspiration, and signs of miracles. In Magnificent Corpses, Anneli Rufus recounts her visits to 18 of Europe's most significant relics. With an engaging mix of history and personal narrative, Rufus tells their secret stories and, along the way, revisits with a fresh eye the compelling accounts of the saints whose physical bodies the relics represent.

Don't read this expecting a glowing hagiography of the saints depicted here. Rufus is not a Catholic, and makes no attempt to be particularly reverent. But neither is she disrespectful, in my opinion. But consider the source: her lack of belief was a selling point for me, somebody interested in the subject who was happy to see a book that dispensed with breathless accounts of poorly attested to miracles. And I, for one, would have a tough time with a book that glossed over how closely the bodies of supposedly incorruptible saints resemble Egyptian mummies, or didn't mention some of the troubling similarities between a lot of female saints.

What Rufus does deliver is a series of trimmed down biographies of the saints, and what happened to their bodies after death, and her impressions of what it's like to visit the relics today. Which means that in one section, she might be talking about the graffiti in the street outside, and in another what a bored child says in the middle of a visit. It certainly isn't to everyone's tastes, but I liked that it gave a more complete sense of her experience than simply describing the gilded angels would have done.

This is one of those books that's ideal for a coffee table. The sections are short, easily and quickly read, and it can be put down and picked up at will. I read it more or less straight through (with a few small detours) because I was hooked. Alas, there are no pictures. Anyone with enough morbid fascination to want to see what Rufus saw will either have to go to Europe themselves or try to google pictures. And let's face it, the number of people interested in this book who won't have that morbid fascination will be very small indeed. And so I am off to google.