More Than an Adventure Tale 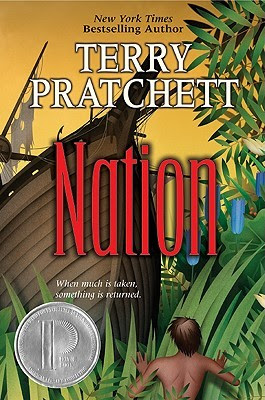 Young Mau is a boy living on an island he knows only as the Nation. He has been sent to the Boy's Island where he must survive until he can, using only the tools of the island, build a canoe that will take him on the return voyage to the Nation. By doing so, he will prove that he is a man and the village will celebrate as he sheds his boy's soul and takes on his man's soul.

Except, when he returns, there are no fires. There are no feasts. There is no one to welcome him home. What is there is death, destruction, and the dawning realization that the Nation, a powerful island tribe, has now been reduced to a population of one. If Mau dies, then the Nation--its heritage, its ancestors, its religion--will die, too.

This book had two strikes against it when I picked it up: 1) it's marketed as young adult and 2) my one foray into Pratchett's writing, The Color of Magic, was underwhelming. So Nation was a very pleasant surprise. This isn't young adult literature in the sense that it's written strictly for a younger audience, but I think it has been labeled as such because the protagonist is young and, now that no one is there to perform the rituals that will draw his man's soul to him, wonders if he'll always be more than a boy but less than a man.

What seems to be a deceptively simple adventure tale on the surface has levels of complexity as it explores issues tied to colonialism, existentialism, feminism, and racism (and one must admit that's an impressive collection of "isms"). As Mau works tirelessly to bury the bodies at sea according to custom, he begins to--as so many do after a traumatic and life-altering crisis--question the gods and everything he's ever been taught to believe in. This confrontation with the void is complicated by the fact that Mau suddenly hears what may be the voices of the gods speaking directly to him. When he comes into contact with whites, he questions whether or not his people, who seemed to have everything, were really inferior savages.

Now, if all that sounds terribly tedious and didactic to you, WAIT--THERE'S MORE! There's also action, adventure, romance, and humor. There are tsunamis, shipwrecks, mutineers, kings, secret passages, sharks, beer, cannons, and a foul-mouthed parrot. And there's a damsel who can take care of herself, thank you very much.

And that's the wonderful thing about this book. It causes the reader to think while being entertained. And Pratchett accomplishes all of this without being preachy or trying to substitute his answer for your own. In fact, his message seems to be that you must have faith in something--whether it's a god, a science, or a nation. As long as what you believe in is good and furthers mankind, your faith is not wasted. Perhaps his stance is best summed up by one of the characters:

Everything I know makes me believe Imo [the god of the islanders] is in the order that is inherent, amazingly, in all things, and in the way the universe opens to our questioning. When I see the shining path over the lagoon, on an evening like this, at the end of a good day, I believe . . . I just believe. You know, in things generally. That works too. Religion is not an exact science. Sometimes, of course, neither is science. (366)