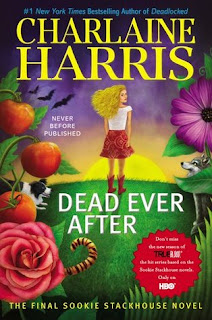 Reviewed by Stephanie
3+ out of 5 stars


So here we are at the end of Sookie Stackhouse and I for one am sad.

This review WILL have some spoilers….be warned, but if you are looking any other review, everybody and their mother wrote ‘photo’ and/or ‘gif’ reviews of this book and all give it away, so…..don’t blame me.

Sookie is a slow learner.

Sookie Stackhouse has been through the wringer with all her supernatural lovers.  For thirteen books she has been close to death numerous times.   This girl has compiled so many enemies I don’t know how she sleeps at night; it would take me two Xanex with and a 'half a bottle of wine' chaser to ever sleep again.   But not Sookie, she cooks, cleans, dresses (badly), puts her hair in a pony tail, takes it out of a pony tail, worries about the ‘dent’ and puts it back in a pony tail,  goes to work at her bar.....narrowly escape death,  does her makeup, waters the plants, sun baths, makes lunch, narrowly escape death……business as usual.

And that’s the ultimate charm of this series.  One day vampires come out of the closet, then the two natured….. Add in a fairy or two, a few witches.  But why let any of that upset your daily routine?  Just go about living your daily lives and almost die in the process.

Now I know ya’all are upset that Sookie did not end up with Eric ‘the hot’ (if that’s possible being dead and cold and all) vampire.  Come on, he nearly got her killed about ten times!! And he was a complete ass to her the whole time. The only reason women like this guy is because he’s easy on the eyes….the whole reason women got all gooey over Christian Grey in those 50 shades books…..(sure he is a psychopath, but he’s a HOT psychopath, which makes it all okay.)  Bill, her first vampire boyfriend, almost got her killed as well.  Step away from the vampire Sookie.

Then there were her baby pangs.  I for one have never had them, ever, but many women do.  You can’t get pregnant by a vampire…..just not possible.  So, she turns to her best friend (who’s not dead…yay!!).   I don’t see the problem here; your best friend is the person you should end up with.

I’ve said this before, but it needs repeating……Charlaine Harris, STOP writing sex scenes!!!  For all that is holy and all that is not, don’t do this to us ever again!!!

“He rolled on the condom and plunged in.”

Email ThisBlogThis!Share to TwitterShare to FacebookShare to Pinterest
Labels: 3-plus star review