The Questing Knights of the space-time contiunuum 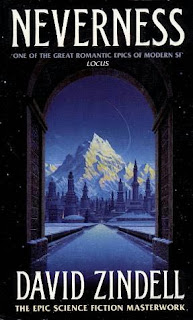 This is a really enjoyable 'big idea' science fiction novel that takes place millenia in our future on the planet Icefall, also called Neverness. It's kind of _Dune_ meets Malory's _Le Morte d'Arthur_ with high level mathematics, posthumanism, and trippy metaphysics thrown in.

The story follows the life of Mallory Ringess, a trainee enrolled at "the Academy" that was founded by a pseudo-monastic order of truth-seekers called 'the Order of Mystic Mathematicians and Other Seekers of the Ineffable Flame' hoping to become a pilot. Now in this day and age a pilot is a very special kind of beast who combines the aspects of a theoretical mathematician with those of a questing knight. Using advanced mathematics the pilots are able to navigate within the manifold, a kind of hyperspace that links all parts of the universe, but whose dangers can lead the untrained or the unwary to get lost in the tangled skeins of space-time. The pilots are thus a special breed. They are men and women who live for the precarious dangers of the manifold and who search, quixote-like, for the proof of the elusive Continuum Hypothesis which would allow a pilot to fall from any point in the universe to any other without the complicated mathematical mappings normally required to traverse hyperspace.

It is also a quest for godhood as the pilots search for the secrets known as the Elder Eddas. These secrets are said to allow beings to transcended their mortality and become gods of one sort or another, and the galaxy is sparsely populated with some of these dangerous and unknowable superbeings, former humans whose consciousness is now housed in nebulae or moon-sized computers. This dangerous life has brought about the motto of the pilots: "Journeymen die", for it is few pilots who ever survive to their mastership.

The world Zindell creates is a fascinating one full of strangeness and wonder. Mallory is an interesting character, equal parts idealistic dreamer and pompous ass. His best friend Bardo is even more entertaining...a figure equal parts Falstaff and Porthos. The story bogged down a bit for me in the middle where Mallory and his fellow searchers look for the Elder Eddas among the Alaloi, a group of humans who had 'carked' their flesh and minds to become like the Neanderthals of earth in rejection of the advanced technology used by the other people of Neverness. Overall, however, this is a great tale, bursting at the seams with crazy-awesome ideas that leave a lot of food for the imagination.

Also posted at Goodreads
Posted by Terry at 7:51 AM