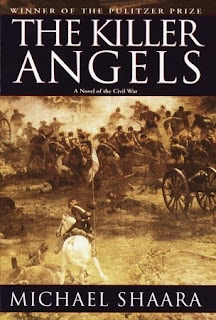 The Killer Angels
by Michael Shaara

This month marked the 150th anniversary of the Battle of Gettysburg which we all know is the fight that took place when Abraham Lincoln wanted to make a speech at that address and then one of the neighbors got mad and challenged him. Or something like that.

Ah, but seriously folks….  Gettysburg was the turning point of the American Civil War in which the Union forces defeated Robert E. Lee’s invading Confederate troops, but this isn’t a non-fiction book about the battle.  Instead it’s a historical fiction in which author Michael Shaara used research and literary license to put us into the minds of several key figures so that readers experience the fight through their eyes.

For this re-read, I listened to the audible version, and it featured an interesting introduction from Shaara’s son, Jeff. (Who has followed his late father’s formula to write several other books about American history.)  The younger Shaara tells of how his father’s book was rejected over a dozen times, was a commercial flop but won a Pulitzer Prize only to see no increase in its profile following the award.  Michael died in 1988 thinking that the book would not be remembered.  In an twist of fate, the movie adaptation Gettysburg that came out five years later would put the book on the best seller list almost twenty years after it was originally published.

On the Confederate side, an ailing and weary Robert E. Lee has pinned his hopes to end the war on the idea of attacking and destroying the Union army on it’s own ground, but his top general, James Longstreet, was against the invasion since he believes the South’s military success has come from a defensive style of warfare.  As they advance into Pennsylvania, they’ve been left with a dangerous lack of information about Union movements because cavalry officer J.E.B. Stuart has been failing to provide them with reports from his scouting mission.

Both sides begin to converge on the small town of Gettysburg which has a valuable crossroads nearby, but Union cavalry officer John Buford is there first and immediately realizes that the hills and slopes outside of the town will give a huge advantage to the army that holds them.  With the Confederate forces closing in fast, Buford occupies and tries to hold the good ground while urging the Union army to rush in and reinforce him.  As troops pour into the area from both sides, they find themselves fighting in a battle no one had counted on.  The Union troops manage to occupy the better positions as Longstreet desperately tries to convince Lee that attacking would be a major mistake, but Lee believes that his army can destroy the Union forces once and for all.

This book and the subsequent film version would do a lot to make people reevaluate Longstreet’s reputation.  He’d been scapegoated by other Confederate officers after the war for the defeat at Gettysburg, but Shaara’s version of events based on letters and diaries of those involved makes a convincing argument that it was Lee whose stubborn refusal to disengage and pick a better spot for a fight was the main culprit for the Confederate failure.

Shaara also credits the forgotten Buford with being a major reason as to why the Union was able to seize the high ground.  He also makes another officer forgotten by mainstream Americans as one of the true heroes of the battle.   Joshua Chamberlain was a professor at Maine’s Bowdoin College when the war broke out, but he showed a knack for military command that eventually put him in charge of a regiment at the end of the Union line on a hill called Little Round Top.  As the extreme left position of the Union forces, Chamberlain and his men had to hold back repeated efforts to flank them by Longstreet’s troops, and then they found themselves in the thick of the fighting again on the last day during Pickett’s Charge.

Chamberlain would win the Congressional Medal of Honor for his actions at Gettysburg, and he would continue to serve with distinction for the rest of the war.  Eventually promoted to the rank of brigadier general, Ulysses Grant chose Chamberlain to command the Union troops at the surrender ceremony.  After the war, he would win multiple terms as Maine’s governor as well as eventually becoming president of his old college.   (Feeling like a slacker yet?)  The book and a great performance by Jeff Daniels in the movie version would make Chamberlain remembered once again.

The prose gets a bit flowery at times, but Shaara’s preface notes that he actually toned down the verbose style of the time.  There’s also a bit too much repetition on a couple of points like Chamberlain’s horror at himself that he ordered his brother to fill a gap in the line during the fight on Little Round Top without a second thought or Confederate General Armistead’s constant references to his friend Win Hancock as he frets that he’ll have to face his buddy on the battle field.

Those are minor gripes about a book that found a new and fresh way to tell a story that every American school kid has heard.  Shaara also does a nice job of pointing out the inherent hypocrisy of the Confederates who claim to be fighting for their rights while not mentioning that what they want is the freedom to keep owning slaves.  That point gets overlooked a lot when the South gets romanticized in mainstream works of fiction, and it’s refreshing that Shaara called bullshit on it.

Random trivia:  Joss Whedon’s television show Firefly was partially inspired by his reading of this book.
Posted by Kemper at 6:00 AM