A Legacy of Violence 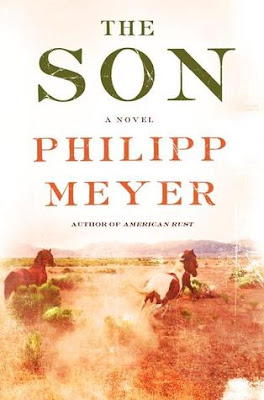 The Son
by Philipp Meyer
Published by Ecco

An epic tale of family set in a state big enough to bear the weight of legend, The Son follows three generations of the powerful McCullough family of Texas: "Colonel" Eli McCullough, the rough and tumble patriarch of the family, whose past includes being a Comanche captive and assimilated tribal member, Texas Ranger, Civil War Confederate, and Texas land baron; his son, Peter, a gentle soul tied to the land, but whose conscience weighs on him after his family's participation in the slaughter of their Mexican neighbors and subsequent land grab; and Jeannie McCullough, the granddaughter of Peter, who shuns society's gender defined role to become the family's first powerful matriarch in the wake of the Texas oil boom. Their stories are inextricably bound to the violent birth and coming of age of Texas.

Through his exploration of the chains of familial duty and legacy, Meyer is depicting more than just the turbulent years of our country's pioneering past. Texas serves as a microcosm through which Meyer skillfully explores the cyclical rise and fall of empire: the success of a tribe or a country or a family is written in the blood of another, one generation crashes into the next, a king must fall before "the son" can take his place. And yet it's more than that--when men build empires, they stare into the abyss of their own mortality and try to leave their mark on a world and a history so vast, so infinite that even the most significant of lives will eventually be consumed and forgotten. Passing the torch to the next generation becomes the only form of immortality one can hope for. But what happens when the next generation wants to build their own legacy, or can't make peace with the sins committed in their family's past? This is particularly evident in the chapters following Peter McCullough, a man defined by a guilt that's not his own, and also in the chapters about Jeannie McCullough, a woman who has to blaze her own trail to keep the family name alive.

The chapters about Eli McCullough are the most engrossing and Meyer doesn't pick sides in presenting the ensuing conflicts between pioneers and the Native Americans. There is no noble savage here; the Comanche are capable of stomach-churning violence (raping and mutilating Eli's mother and sister before his eyes, torturing enemies in their camp, raping and brutalizing captives), but they are also compassionate and funny in their relationships with one another. The same is true of the pioneers--engaging in unspeakable acts of cruelty against the Comanche and other tribes, they are not monsters entire. Instead, both sides are all human with "Something of the reptile in us yet, the caveman's allegiance to the spear." The fight for land and dominance was not unique to the whites as it is ingrained in human culture to take from those who are different and whose ways one does not understand.

An overall excellent novel, the only reason I'm giving it a 4 out of 5 star is because it is grim reading, which made me long for a bit of Larry McMurtry's ability to balance grim reality with the humor in life. Also, I found the presentation of the three differing narratives perplexing. The Eli and Peter chapters are told in first person, while Jeannie's are told in third (which may be to show her struggle for "voice"). Eli's chapters are originally presented as the result of an interview done at the end of his life, but do not read as an interview. Peter's chapters are told in the form of a diary, which reads like no diary ever kept by anyone in human existence. Instead, they read just like novel narrative, continuing for pages with exact dialogue and lengthy descriptions with little to designate them as diary entries other than the occasional insertion of a date. These conventions, the interview and the diary, seemed unnecessary and were at times off-putting.

There was little to differentiate the voices of Eli, Peter, and Jeannie, but maybe that's the point--that theirs is the voice of history relating a story that will be told time and time again with no one learning its lessons.
Posted by Amanda at 8:00 AM