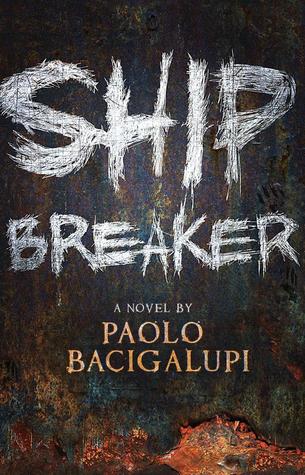 
In America's Gulf Coast region, where grounded oil tankers are being broken down for parts, Nailer, a teenage boy, works the light crew, scavenging for copper wiring just to make quota--and hopefully live to see another day. But when, by luck or chance, he discovers an exquisite clipper ship beached during a recent hurricane, Nailer faces the most important decision of his life: Strip the ship for all it's worth or rescue its lone survivor, a beautiful and wealthy girl who could lead him to a better life...


I’m gonna heap a Whole Lotta Love on this story, just because it deserves it. It was fun, gripping, violent, tense, bleak and there was even a little sweetness at its core.

Now that I’ve quit my job, I thought my nightmares about work would be over. As soon as I started reading this story, I had a dream I was salvaging copper wire from grounded ships. My boss reprimanded me because I was not making quota and also because I was rapidly gaining weight, which made it difficult to fit into small places. My fingers were like sausages, unable to retrieve the copper wire, and I was soooo hungry…

I woke up, made myself some scrambled eggs and sausage, and continued reading.

Thank the Fates it was not me who was performing this dangerous, back-breaking labor, but Nailer, an uneducated teenage boy. He works with a crew of kids his own age who face a similarly grim future. I liked the diversity of the cast, even though at times I felt color was added just to “cover all the bases.”

One of my favorite aspects of this story is the setting. Violent storms have devastated the Gulf Coast region and rising seas have submerged entire cities. Unlucky ships often get caught in “the teeth” if they are not familiar with the area.

I love how this story explores poverty and class differences, friendship, family and survival. It does not shy away from violence or death.


“Getting over something like this takes time. It won’t be better today. Not tomorrow, either. Maybe in a year, though, it won’t be like this. Maybe in a year you’ll have mostly forgotten. But it will still be there. You’ve got blood on your hands.” She shrugged. It always costs. It never goes away.”


Nailer learns the importance of family, even though his own father set a bad example.


“The blood bond was nothing. It was the people that mattered. If they covered your back, and you covered theirs, then maybe that was worth calling family. Everything else was just so much smoke and lies.”


I finished this story in two nights and now have the sequel in hand. Sure, there are a few flaws. I wish some of the secondary characters had been explored more deeply, particularly Nailer’s father. He’s rather one-note and I would have liked to see a glimpse of his humanity, before his addictions took over his life.

This is an exciting, well-written, and highly imaginative story.

What are you waiting for?

Also posted at Goodreads.
Posted by Nancy at 10:00 AM