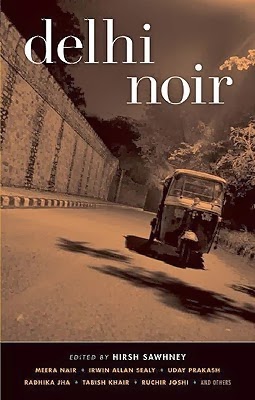 The eyes of the world are gazing at India—the world’s largest democracy. But the books you read about this Asian giant only show part of the picture.

Delhi Noir’s fourteen original stories are written by the best Indian writers alive today—the ones you haven’t yet heard of but should have. They are veteran authors who have appeared on the Booker Prize short list and budding geniuses who your grandchildren will read about in English class. Delhi Noir is a world of sex in parks, male prostitution, and vigilante rickshaw drivers. It is one plagued by religious riots, soulless corporate dons, and murderous servants. This is India uncut, the one you’re missing out on because mainstream publishing houses and glossy magazines can’t stomach it. offers bone-chilling, mesmerizing takes on the country’s chaotic capital, a city where opulence and poverty are constantly clashing, where old-world values and the information age wage a constant battle.


Once again, I have sought out another book from the Akashic series of short stories that takes place in a variety of cities around the world. I am still in the mood for dark, short stories, so Delhi Noir was the perfect choice.

I have never been to India, and based on this collection of stories, I'm not sure if I want to go. It is chaotic, crowded, loud, corrupt, poor and dirty. There is also amazing architecture, natural beauty and good food, even the cheap stuff you get at the roadside stalls. I'm very glad for my literary journey to Delhi. The stories were vivid enough to give me a glimpse into a culture very different from my own, even if they show humanity at its worst.

I'm a little disappointed that out of the 14 contributors, only 3 of them are women. Nevertheless, their stories are outstanding.

Manjula Padmanabhan's Cull is the very last story and one of my favorites in this collection. More speculative fiction than noir, it is very dark and would make an excellent novel. It shows the callous disregard people in power have for the poor residents of the Acres and it shows how strong and resourceful the poor can be.


"From the bottom of the pit, all roads lead up. So in one sense, this is an extremely positive place to be. Rich people throw away things at such a rate that for us, living in the dump, we only have to wait long enough before whatever we want comes sailing out of the sky - for free! Cars, food, books, furniture, machinery, medicine, bottles toys - you wouldn't believe how much gets thrown away. And very often in its original packing. So we're not complaining. We take what we need, repackage the rest, and send it back out."


Radhika Jha's very humorous How I Lost My Clothes effectively highlights the contrasts between the rich and the poor of Delhi and shows how a new set of clothes can change one druggie's perspective on life.

Meera Nair's Small Fry shows a glimpse of the harsh life of a 15-year-old street boy as he looks for a fast way to make some money. Crime, corruption and greed make this one a top-notch story.

And now the men:

Omair Ahmad's Yesterday's Man was not one of my favorites in this collection, but I did enjoy the detectives working together to solve a case involving the 1984 mass murder of Sikhs, an event I have little knowledge of, but plan to explore further.

Irwin Allan Sealy's Last In, First Out, told from the perspective of a rickshaw driver, very vividly describes the city of Delhi and some of its beautiful and more secluded spots, where young lovers like to retreat. Unfortunately, sexual assaults are rampant here and the rickshaw driver decides to take matters into his own hands.

Ruchir Joshi's Parking is probably my least favorite in this collection. The corrupt, perverted cops annoyed me and I couldn't care about a single character.

Nalinaksha Bhattacharya's Hissing Cobras features another corrupt police officer who wants to charge a woman with a crime he has no proof she committed, so he blackmails her. He picked the wrong woman to mess with. I loved this gritty and satisfying story.

Mohan Sikka's The Railway Aunty is not about someone's aunt. This term is used to refer to older female family friends or neighbors. A heady mix of greed and lust. Terrific story.

Siddharth Chowdhury's Hostel was utterly creepy and voyeuristic. I don't mean that in a good way.

Hartosh Singh Bal's Just Another Death is an interesting story about a reporter trying to survive in a changing industry. Death is secondary.

Tabish Khair's The Scam. A shoe-shine boy and woman engage the curiosity of two journalists.

Hirsh Sawhney's Gautam Under a Tree is a sad and moving story about a former journalist who accepts an assignment to write about the murder of his friend who was a political activist. This is a dangerous undertaking, as he well knows.

Uday Prakash's The Walls of Delhi is another favorite of mine. Ramnivas the sweeper comes across stacks of money hidden in a wall where he's cleaning. He uses this money to provide a better life for his family and entertain his mistress. Of course, there are consequences to making it big the easy way.

A worthy collection. Up next, Paris!
Also posted at Goodreads.
Posted by Nancy at 5:20 PM