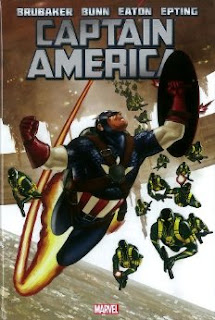 Reviewed by Kemper
4 out of 5 stars

Ed Brubaker wraps up his 8 year run of writing Captain America, and once again he does a nice job of making Cap a lot more than just a guy running around in a flag suit while punching out villains and shouting, “ ‘MERICA!”

Madame Hydra and Bravo are launching repeated attacks against civilians using a new pack of super baddies called the Discordians, but what’s even worse is that TV news host Reed Braxton is working the public into a frenzy by claiming that Cap is obsolete and incapable of protecting America.  Braxton starts blaming Cap for all of America’s woes and soon angry mobs begin rioting all over the country.  Even worse, Cap is starting to doubt himself.

The stuff with Cap and his pals versus Hydra is pretty standard superhero fare. The plot featuring Braxton tearing down Cap is where Brubaker makes an effective point about how cable news is a perpetual outrage machine used to manipulate American society.  There’s a particularly nice bit while Braxton reassures viewers that he’ll stay on the air during an attack to make sure that they get the truth and accountability they deserve, and all of this self-aggrandizement is juxtaposed against the images of Cap on the ground risking his life while fighting bad guys and saving people who berate him for it.

The Brubaker era has encompassed the death, replacement and return of Captain America, and he’s always been interested in exploring the concept of what it means to be a symbolic figure. Whether it was Steve Roger as the old war hero who was increasingly feeling the burden of wearing the red, white and blue as regrets piled up or Bucky Barnes struggling to fill Steve’s shoes and atone for his sins, Cap remained the guy people looked to for inspiration and leadership in the Marvel universe even if the man behind the mask doubted whether he was worthy of that trust.

The best part of this collection is Brubaker’s swan song in which Steve recounts his long history in conversation that also includes a nice nod to the first Captain America comic book and its creators, Joe Simon and Jack Kirby.  The point is underlined here that Steve never wanted to be a hero.  He was supposed to be the first of many super-soldiers, but circumstances forced him into becoming something more than a guy who did his part.  It also is a nice summary of how what started as a propaganda character to punch Nazis eventually became a way for various comic book writers and artist to explore the ideology of America at it’s best and worst.
Posted by Kemper at 12:10 PM