Another Entertaining Read from Jamie Harrison 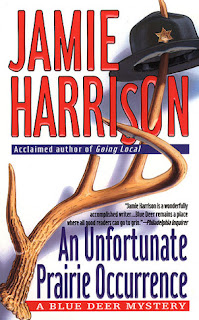 
This is the third of Jamie Harrison's novels set in the small town of Blue Deer, Montana, and featuring archeologist-turned county sheriff, Jules Clement. In the first two books, The Edge Of The Crazies and Going Local, a prominent theme was the interaction between the long-time residents of Absaroka County and the usually wealthy newcomers who were moving into the county, attracted by its beauty and recreational opportunities.

In this case, however, Harrison sets that conflict aside to examine the relationships that exist and the way that crime can affect those relationships, in a tiny community where everyone knows virtually everyone else and in which they are often related to each other by blood or marriage.

By now, Harrison has firmly established the basic cast of characters that inhabit Blue Deer and orbit around Jules, the principal character. The relationships among them are tested when a fisherman discovers a portion of a skeleton on an island in a nearby river. Much of the upper torso, including the head, is missing. But some hair has been preserved as has the man's ornate belt buckle. In addition, there's the two bullets that Jules discovers on the ground under the man's abdomen.

It seems clear that the body was buried on the island years earlier and only exposed now as the river gradually eroded away a portion of the island. Jules, who was an archeologist before returning to Blue Deer, is thrilled at the prospect of using his scientific skills to investigate the man's death.

Jules ultimately determines that the man was somewhere in his twenties at the time of his death and that he was killed sometime in the late 1930s, and he sets the elderly ladies of the town's historical society on the task of identifying someone who went missing about that time and who was never heard from again. In doing so, though, he inadvertently opens a can of worms that a lot of people, including members of his own family might wish had been left unexamined.

In the meantime, of course, Jules has to deal with the usual run of crimes that occur in a small town like his, including drunken driving, domestic abuse and juvenile delinquency. There's also a rapist attacking women who live alone and who seems to be increasing the frequency of his attacks.

A lot of eccentric characters populate this book and it's as much fun watching Jules navigate the complexities of the relationships among them as it is to watch him at work attempting to solve all these crimes. But the reader should not expect this to be a nice cozy mystery. It isn't, and Jules is no Miss Marple. Underneath the humor, there's a hard edge to these books.

The cast of characters is large, and sometimes it feels like you might need a flow chart to keep straight them and the relationships involved. A reader needs to pay attention, but the attention is well-rewarded by a solid, entertaining read. This is a book that would appeal to a large number of readers, but as is often the case, someone new to the series might well want to start with the first book rather than the third.
Posted by James L. Thane at 9:43 AM