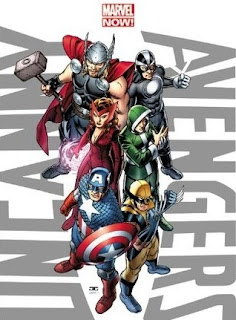 A decent enough premise for a team, ruined by a dumb story. In the wake of Avengers vs. X-Men, the concept of the team makes perfect sense, from both an in-universe perspective and a storytelling perspective. Put together a team of five heroes, two mutants who were X-Men, two non-mutant Avengers, and one mutant Avenger. Calling it the Unity Division is maybe a little heavy handed, but the entire team is an obvious, somewhat heavy handed gesture. Like I said, it makes perfect sense. It's the makeup of the team that's slightly questionable. Take a look at the cover: Captain America is front and center. Is he team leader? No, that's Havok's job. I can't help but feel like that's a bad idea that will cause more trouble than it's worth. Sure, having a mutant in charge makes perfect sense for a team that's essentially a PR exercise. But Cap's very presence makes Havok's leadership questionable. And then there's Wolverine, who at this point is on every superhero team in the world. Haven't we hit the saturation point on this character? Rogue also seems like an odd choice to me, but I shrugged that one off. I was confused as to why she was so hostile towards Scarlet Witch when she had been pretty open towards her in Avengers: The Children's Crusade, but I probably wouldn't have noticed if I hadn't read those books back to back.

Now the story itself... Sigh. Red Skull, of all characters, has developed a serious hate for mutants. (Is this new for the character? I haven't read enough Captain America to know.) So he steal's Xavier's brain and uses it to give himself extreme mental powers, way beyond anything that Xavier ever demonstrated. The very premise is laughably D movie to me. I have a hard time believing that implanting Xavier's brain into Red Skull would work, and I certainly don't believe that it would make him even more powerful than Xavier had ever been, to the point of completely brainwashing and mentally controlling large numbers of people with seemingly no effort. I don't object to the anti-mutant hysteria storyline itself, because it seems like a no-brainer that the events of Avengers vs. X-Men would have brought those tensions front and center. It was just done in a very silly way.

Could this team work long term? Sure, maybe. Like I said, the idea is solid enough, and probably common sense if the goal is to tone down anti-mutant sentiments. But this story was just so dumb that I couldn't take it seriously.