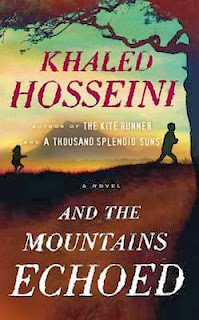 And the Mountains Echoed by Khaled Hosseini
2013
Reviewed by Diane K. M.
My rating: 3 out of 5 stars


This is a difficult book to review. Hosseini is a good storyteller, but I have the same complaint about this book as I did with "The Kite Runner," which is that it is too precious. As in, roll-your-eyes, on-the-nose precious.

But before I focus on the negative, let me share the positive: This is an impressive story that spans generations and continents. Each chapter is told from a different character's point of view, and each section builds on the events that have come before, and by the end we have covered more than 60 years of a family's story.

The book opens with a legend about a giant who would go to a village and demand a child be sacrificed to him. A father was forced to give up his favorite son, and he was so heartbroken and upset that he later left the village to try and retrieve him from the giant. But when he arrived at the giant's house after many days of walking, he saw that his son was happy and was living a better life than he could have provided. The giant takes pity on the father and gives him a potion to help him forget his son. But did the father ever really forget?

The meaning of this legend is soon made evident when we meet a boy, Abdullah, who is forced to say goodbye to his beloved sister, Pari, who is being sent to Kabul to be adopted. In the next chapter we meet the woman who will become Abdullah's stepmother, then we meet Abdullah's uncle, then we meet some cousins who used to be neighbors of the uncle... and so on, and so on.

There are many good moments in the book, such as when a character recognizes his or her selfishness and vows to do better. Or when relatives have been reunited after a long separation because of the war. And as the story unfolds, we must ask if Pari was better off being adopted, or should she have stayed with her family in the village?

A minor complaint of mine is I think Hosseini skimped on details of the wars in Afghanistan and on the clashes with the Taliban. True, he covered this in previous books, and in this book one of the characters wrote in a letter that the wars have been well-documented elsewhere, so there's no point in describing it. But I disagree, because I think it was a bit of laziness on the author's part. This is a story about an Afghanistan family from the 1950s to present day. The war violently disrupted the country and the family, and yet here it only surfaces as background noise. (For readers who want to know more about Afghanistan during this time period, I recommend the memoir "The Favored Daughter" by Fawzia Koofi.)

For most of the book I was prepared to give it four stars, but about three-fourths of the way through I grew weary of the too precious dialogue, the characters who were just too earnest and understanding, and the seemingly endless exposition. What finally pushed me over the edge was an extended section in Greece, which I think could have been cut entirely.

I think Hosseini is a big bestselling author because he tells good stories -- and for most people, that is enough. But when I compare him to my other favorite novelists, his books leave me wanting something more.
Posted by DianeLibrarian at 8:00 AM