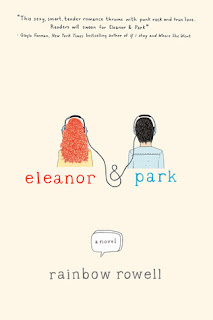 I need to state right away that YA is not one of my favorite genres: I hated the Twilight books, I'm not a fan of paranormal romance and I've been avoiding the flood of YA dystopian novels. I want this to be clear because if you like YA, then my negative reaction probably won't apply to you. You may love this book, as many others already have.

I wanted to read this novel because it received several glowing reviews and it was being compared to John Green's "The Fault in Our Stars," which I really liked. "Eleanor & Park" is set in a high school in Omaha in 1986. The titular characters are teenagers who meet on the school bus -- Eleanor dresses weird and is new at the school; Park is biracial and tries to keep his head down so he won't get picked on. The two bond over comic books and music and fall into puppy love.

My main complaint is that Rowell tried putting 10 pounds of plot into a 5-pound bag. As if the outsiders-fall-in-love story wasn't enough, she gave Eleanor a hellish home life: her stepfather is abusive, neglectful and had previously kicked her out of the house for standing up to him. Meanwhile, Park, whose father is white and his mother is Korean, feels like a "pussy" compared to his ex-military dad, who yells at him a lot. Much of this family stuff didn't ring true and it felt so forced that I had to do a lot of skimming to survive the home scenes. Of course, I also had to skim a lot of the school scenes because the dialogue of the teens was so contrived.

And then there are all the retro pop culture references -- never for a page does Rowell let you forget that the story is set in 1986. OK, OK, we get it already.

But what really made me want to heave this book across the room was the ping-pong writing style. Rowell wrote very short sections, bouncing back and forth and back and forth between Eleanor and Park's point of view. It is the perfect example of how limited the modern attention span is that writers think the only way a young person will read something is if it's in short posts. (Curse you, Twitter!)

I think "Eleanor & Park" was trying to do too much and ended up being bad at all of it. There are so many other books that do all of these elements better. For young love, I really liked John Green's "The Fault in Our Stars." For 1980s references that aren't overdone, I liked Carol Rifka Brunt's "Tell the Wolves I'm Home." For dysfunctional family, try Jeannette Walls' "The Glass Castle."

As for me, this book may have scared me away from YA for a while. I'm sticking with adult books, because I'm an adult who is getting grouchy about losing precious reading time on mediocre stories.
Posted by DianeLibrarian at 8:30 AM