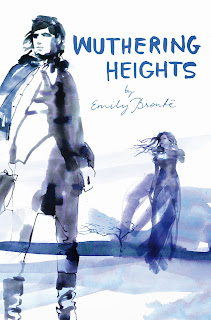 Wuthering Heights by Emily Bronte
1847
Reviewed by Diane K. M.
My Rating: 3 out of 5 stars

I was not prepared for how bleak this book was. I had seen movie versions of Wuthering Heights, but this was my first time reading the novel, and it was much darker than I expected.

So many of the characters are utterly unlikable! Cathy is selfish and foolish and obstinate; Heathcliff is brutal and vengeful and psychotic; Hindley is spiteful and venomous and a drunkard. And when Edgar and Isabella Linton enter the story, everything goes to hell in a handbasket.

Why, oh why, did Cathy marry Edgar when she admitted she loved Heathcliff? As a reader, I wanted to shake her and scream at her that she was making a disastrous choice. Let's hear it from Cathy herself: "I've no more business to marry Edgar Linton than I have to be in heaven; and if the wicked man in there had not brought Heathcliff so low, I shouldn't have thought of it. It would degrade me to marry Heatchliff now; so he shall never know how I love him: and that, not because he's handsome, Nelly, but because he's more myself than I am. Whatever our souls are made of, his and mine are the same; and Linton's is as different as a moonbeam from lightning, or frost from fire."

Yes, I know Cathy felt she couldn't marry Heathcliff because of his low birth and lack of education, but considering how isolated they were in Yorkshire, did it really matter that much? Was that Bronte's point -- that disobeying one's heart by following the courtship rules of one's social class caused suicidal and homicidal ravings?

I agreed with Heathcliff when he later scolded Cathy for her decision: "You teach me now how cruel you've been -- cruel and false. Why did you despise me? Why did you betray your own heart, Cathy? I have not one word of comfort. You deserve this. You have killed yourself. Yes, you may kiss me, and cry; and wring out my kisses and tears: they'll blight you -- they'll damn you. You loved me -- then what right had you to leave me? What right -- answer me -- for the poor fancy you felt for Linton? Because misery and degradation, and death, and nothing that God or Satan could inflict would have parted us, you, of your own will, did it. I have not broken your heart -- you have broken it; and in breaking it, you have broken mine."

There was such violence in this book! Women are beaten and locked up; children are bullied and abused; punches are thrown, shots are fired, and even dogs are kicked and hung. Egad. I can imagine how shocking it must have been to the good folks of England when it was published in 1847, learning that not only did a woman write it (gasp!), but that she was a clergyman's daughter (double gasp!), and the story involved a married woman having a tryst with another man. The horror!

Despite not liking the darkness of the novel, I thought the writing was good and the structure was interesting: the servant Nelly Dean relates the history of the doomed love affair to an outsider. The servant was an interloper and kept informed on events in both houses. I can't imagine a more effective way to tell the story of the love triangle. I wouldn't trust either Heathcliff or Cathy or one of the children as a narrator, they might only tell their parent's side of things. Of course, it's also interesting that Nelly Dean may not be a reliable narrator either. She often edits and omits what she tells the master; why should we believe she'd tell an outsider the whole truth?

It took me twice as long to get through this novel as it should have -- it was so bleak that I was hesitant to pick it up. The only other Bronte sister book I've read was Jane Eyre, which I liked very much, but that love story at least has some warmth in it. In contrast, Wuthering Heights left me feeling cold and bitter. I'm glad I've read it, but I won't be rereading it anytime soon.
Posted by DianeLibrarian at 7:00 AM