The Cold Touch of Magic 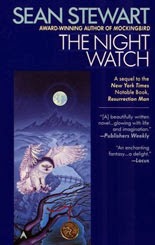 Sean Stewart is one of those writers I used to buy sight unseen (before he unfortunately dropped out of writing novels and decided to devote his time to writing interactive online games). His books tend to be very character driven, something I personally like, and he has an individual writing style that manages to be 'writerly' without getting bogged down in stylistic tricks.

Basically it is the story of a future earth in the year 2074 after an inundation of magic has flooded the world (this flood started soon after WWII in Stewart's timeline) and only pockets of human civilization are left in the sea of wild and magical frontiers (in this the story can be seen as a member of the same universe as _Resurrection Man_ and _Galveston_). The novel concentrates on two societies, the Southside, which is a relatively technological and militaristic state located where Edmonton used to be and Chinatown, located in the appropriate region of Vancouver. The former community has made a Faustian deal with the spirits that haunt the Northside in return for the opportunity to be left alone, while the latter lives in the midst of its spirits, especially the three godlike, and archetypal, beings the Dragon, the Lady and the Monkey and the beastlike barbarians (magically mutated humans from the initial magical explosion).

Following the lives of several intertwined groups of characters from each community, Stewart examines the dynamics of these two opposing points of view in an era where the high tide of magic is finally starting to recede and, as ever, human machinations and politics attempt to take advantage of the situation.

Stewart manages to populate his world with many interesting, and realistic, characters. None of them are painted in black-and-white terms and even the 'villians' have realistic motivations that point to a multi-faceted melding of both self-interest and even love of community. The real star of the book for me, though (even with Stewart's finely realized and well-drawn characters) was the world itself. It is a world we can recognize, and yet at the same time it is completely alien. The small enclaves of humanity fighting for survival in a world that can barely be understood in the rational terms humanity had been wont to apply to it before the 'Dream' overtook them are intriguing reflections of both humanity's ever-present willingness to fight against the odds, as well as an acknowledgment of the myriad of ways in which this can be done. In many ways I felt that Stewart had managed to capture the air of the medieval romance (in terms of world-building if not in style or content) with the minor 'kingdoms' of humanity placed in the midst of the ever encroaching 'wild wood'...a place where demons and ghosts walked and adventures or power might be bought, though at a very high price. The lure of the dream-world is always in contention with the obligations and comforts of human society.

I also like the way in which Stewart paints magic. It is a wild and largely uncontrollable force, though as mentioned certain deals can be made with it in exchange for ability or power. It seems to me to be an appropriate way to look at something that truly is the reverse of 'science' in that while magic does follow certain rules these are more along the lines of adhering to agreements and obligations than being a cookie-cutter 'physics of magic' where spells of fireball or lightning can be produced given the proper reagents and incantation. It is a force that is mysterious and wild, in that sense at least it mirrors nature, though it cannot be easily understood or defined by rules of cause and effect in any systematic way.

The story itself deals with the beginning, and dissolution, of relations between the Southside and Chinatown as we see the leaders from each community vying for power and control. In the midst of this the heir to Southside's virtual king must make a choice that will determine not only her own future and safety, but that of her people and one of the 'heirs' to a great power of Chinatown must come to terms with her place in the world and her familial relationships as well. This book, like all of Stewart's, is primarily about human relationships. He examines how they grow, and end, in the midst of stress and change. He also looks at the price they exact upon us and the give-and-take that must be accepted in our attempts to balance our personal and individual desires with our public and communal responsibilities.

All in all _The Night Watch_ is a great book. It's a well-written story of human relationships set against a backdrop of conflict and magic in a world that could almost, but not quite, be our own.

Also posted at Goodreads
Posted by Terry at 10:01 AM