Have Sword, Will Travel 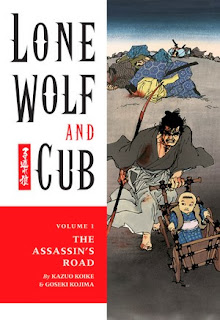 A ground-breaking manga first published in Japan in 1970, Koike & Kojima’s “Lone Wolf & Cub” series follows the exploits of a laconic master assassin whose most defining characteristic, aside from his near unstoppable lethality and ingenious tactics, is probably the fact that he wanders Tokugawa- era Japan pushing a baby cart containing his three-year-old son Daigorō. As a result they are known throughout the country as Lone Wolf and Cub, a mysterious assassin ‘team’ who, for 500 ryu (gold pieces) will kill anyone so long as all details about the victim and circumstances are provided. The series became a pop-culture phenomenon in Japan, spawning six movies (they’re quite good), four plays (thanks Wikipedia!), a television series, and numerous rip-offs and homages. This volume is part of the reprint series published by Dark Horse comics starting in 2000 and contains nine of the adventures of Lone Wolf and Cub.

If you’re going to read this series you should be prepared for a few things: graphic violence involving samurai combat and assassinations is prevalent as is (usually violent) sex scenes and nudity…so not one for the kiddies. Also keep in mind that the basic premise behind each of the stories is usually a depiction of the various assassinations undertaken, and invariably completed, by Lone Wolf and Cub. There can, as a result, be an apparent sameness to many of the stories once the novelty of a new victim being dispatched in a unique way loses some of its shine. Keep in mind, however, that as the stories build we begin to get glimpses into the life and motives that drive Ogami Ittō (the eventually revealed name of the assassin) and each individual ‘adventure’ starts to tie in to the larger story arc of his tale of loss and vengeance. You will also be treated to some wonderful artwork and storytelling depicting both the stunning natural beauty and convincing historical details of 17th century Japan.

One thing to note is the way in which, while we come to learn a lot about both Ogami and Daigorō as the stories progress, in many ways it is the secondary characters who really shine in these stories. Even though they are usually people we will never see again, often because they don’t survive the issue, they really do come to life on the pages and often resonate far beyond the confines of their individual stories. Their diversity is also impressive as they exemplify a truly varied range of characters, lifestyles, and outlooks within the Tokugawa-era Japan that Koike & Kojima bring to such vivid life on the pages. One final element to note: Ogami is an assassin who has willingly ostracized himself from normal human society and he acts accordingly, thus we do not have the somewhat dubious paradox of the ‘good guy assassin’. Ogami is certainly often sympathetic, and when he is able to do so he is often more than willing to help those in need, but he is first and foremost an assassin with an agenda of his own that overrides all other concerns and thus he will always finish the job, whether we think his victim deserves their end or not.

“Son for Hire, Sword for Hire”: Koike & Kojima drop us in media res as we are observe a secret meeting between a nobleman and an unknown assassin. His assignment is to kill a high ranking noble who schemes to gain control of his Han as well as ‘the Guardian Eight of Mibu‘ who defend him. Ogami uses both his skill with weapons and tricky planning to earn his gold as he faces off against the group of famed warriors that guard his mark, a fairly typical scenario for LW&C. We see that Ogami plays the long game even in this very first story as he safeguards himself against not only his opponents, but also his employer.

“A Father Knows his Child’s Heart, as Only a Child Can Know his Father’s”: We learn that Ogami is truly single-minded in his devotion to his path of vengeance, even to the point of using his own son as a tool in his missions, whether that be as bait or in other ways. As far as Ogami is concerned both he and Daigorō truly are united in their endeavour and both father and son “walk the path of meifumado”, or Hell on Earth.

“From North to South, From West to East:” Ogami uses his martial skill to despatch many assailants, but proves that it is his strategic and tactical decisions that truly make him formidable. A child once again proves the key to Ogami completing his mission, though this time it isn't Daigorō.

“Baby Cart on the River Styx”: Ogami and Daigorō are caught between corrupt government officials, a shift in local power, double crosses, and an imminent gang war between rival Yakuza clans. I have to admit that I didn't fully follow the intricacies of the plot in this one, maybe they got the story from Raymond Chandler?

“Suiō School Zanbatō”: Ogami again uses Daigorō in his plans, this time to draw a samurai into a fight he can't win. When his victim’s friends look for vengeance Ogami utilizes the secret of his Suiō School Zanbatō technique to even the odds.

“Waiting for the Rains”: Ogami uses Daigorō as a way to secretly transport both instructions and payment from his current employer and then shows how his thorough research into both his victims and his employers leads him to success.  Even though only drawn with minimal strokes the background story of two of the secondary characters revolving around love deferred and promises kept even in the face of death was pretty striking.

“Eight Gates of Deceit”: Ogami proves his martial skill as he faces off against eight famed female assassins and then proves his superior strategy and forethought in the midst of a wily trap.

“Wings to the Bird, Fangs to the Beast”: Ogami and Daigorō come across a village famed for its hot springs spa that has become overrun by a gang of rōnin where they meet a hooker with the proverbial heart of gold. This seemed like a pretty light issue with not much to it aside from the proverbial fight and a partial reveal about Ogami’s background.

“The Assassin’s Road”: The final story of the volume gives us a flashback glimpse into the events that led both Ogami Ittō and his son Daigorō to choose the path of meifumado and head out on the ‘Demon’s Road’ of assassination. Schemes at the highest levels of government have targeted Ogami and his family and only his cleverness allows him to escape his most dangerous foes with his life.

What can I say? LW&C is truly a classic of the genre and as long as you can stomach some significant scenes of violence and a ‘hero’ whose gray shades significantly into black at times, then I highly recommend it. Especially excellent for its depiction of a historical era and society so different from what we know that still manages to bring the characters it presents to vivid life.