Special Guest Post by Steven White: Q & A with Preston & Child (With a Giveaway)! 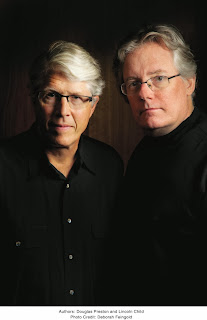 Steven White of Rainy Day Reading List recently conducted a Q & A with Douglas Preston and Lincoln Child and was kind enough to let us host it.  Enter the Rafflecopter giveaway at the bottom of the page to enter a drawing for an ARC of White Fire!


First, thank you so much for writing one of my favorite series of all times and providing years and hundreds of hours of enjoyable reads (and rereads!), and for taking the time out to answer a few questions for your fans!

Preston & Child: Thank you for having us and for all those kind words! We look forward to your questions.


1. In White Fire, you decided to create a chance encounter between Oscar Wilde and Sir Arthur Conan Doyle that ended up being the missing link that Pendergast needed to solve the case. What led you to choose these two authors? Was it nerve-wracking to write an “offical” Sherlock Holmes tale to include in White Fire’s plot, with the permission of the Conan Doyle estate of course? Was it hard to jump into the mindset of an author long dead and try to make it sound like it was in his voice? What did the estate think of your idea and eventual story? Was Sherlock Holmes any inspiration during your creation and development of Pendergast?

Linc: By happenstance, I learned about a true incident in which Conan Doyle had dinner with Oscar Wilde at a posh London hotel. This was mind-blowing; I couldn’t imagine two more different writers. What could they have talked about? I knew there was a book in there somewhere, and an immediate brainstorming session with Doug brought the bones of that book together.

Yes, it was a little nerve-wracking to write an officially sanctioned Sherlock Holmes story. Holmes was, after all, one of the numerous inspirations for Pendergast (as you surmise). And the Estate needed to see the opening of the story before they would give permission. So for a week I did little but surround myself with actual stories from the Holmes canon. Then I took a deep breath and forged ahead with the first draft. Luckily, with Doug’s help, everything worked out splendidly.

Doug: It was amazing to see how the idea developed. Once Linc had come up with the opening concept, I suggested a setting of Aspen, Colorado, because I thought the idea of Pendergast in his black suit and vicuña overcoat knocking around that chic and fashionable ski resort, like a fish out of water, was just too good to pass up. (We eventually changed the name of the town to Roaring Fork, because we wanted to alter some historical and geographical details.) I also suggested a back-story involving man-eating grizzly bear attacks, the digging up of a historic cemetery to make way for development, and a serial arsonist burning down multi-million dollar mansions—with the families inside. All these elements were woven together to create a seamless story. It was a great example of our writing partnership working at its most creative pitch.

2. As a team, you both put a lot of thought into your titles. I remember submitting ideas for Two Graves, but then loving the final title so much better than my suggestions. What other ideas were thrown out while writing White Fire, and what made you settle on White Fire?

Linc: Our working title for the book was BANE. Our publisher wasn’t happy with that, and so we started the process of bouncing possible titles back and forth. At the time, I was reading the biography of a famous horror writer, and at one point in it the title of a very old book—I believe it was a collection of poetry, but I’m not even sure it was ever published—was mentioned in passing. That title was WHITE FIRE. It seemed perfect to me for our use, referencing as it did both the snowstorm and the dreadful arsons that together dominate the story (in addition to being an arresting image on its own.) Our publisher agreed.

3. I’m constantly trying to get new readers to join the Pendergast fan club. I want the series to keep going for years to come! I sometimes have trouble describing the series to them though, as it’s so many things -- mystery, thriller, history lesson, detective novel, horror story, techno/supernatural tale… If you had to describe your works for a new set of readers, how would you describe it?

Doug: We have the same trouble ourselves, and I’ve noticed that bookstores put the books all over the place in various sections. The Pendergast books contain a taste of all those genres. But what brings it all together is the unique character of Pendergast himself, who is a man out of his time, the embodiment of old-fashioned values, codes of conduct, and civility that have largely been lost in the modern age—combined with a strong sense of justice, a hatred of bullies, and a love of fine food and wine.

4. Do you plan on bringing back the new character, Stacy? I really liked her! What about some of our other cast members, like Nora Kelly, Margo Greene, Viola Maskelene, or others? We all know you’ll bring D’Agosta and Hayward back in the future already! Haha! What about Diogenes? Any chance he escaped death and will return?

Doug: After all these novels, we’ve created a kind of alternate reality, populated with a wide cast of characters. Stacy is a wonderful character and I would love to see her in another book, so I would say that is quite possible. Margo plays a major role in the Pendergast book we are now writing. Nora will surely appear in the future. Viola Maskelene… Well, maybe I shouldn’t tell you this, but her relationship with Pendergast is firmly over, and she will not appear in a future book. As for Diogenes, I will only say this… did anyone see his dead body?

5. Is the next Pendergast book in the works already? Any tidbits you can share about that one?

Linc: I wish I could, but we’re keeping the details close to the vest for the time being. We can confirm, however, that it will be a standalone book, and not the start of a trilogy.

Doug: A hint: a terrifying sequence takes place in the ruins of an abandoned resort on the shores of the Salton Sea in California…

6. You’ve also co-written other books together, most recently the Gideon Crew novels. When can we expect a third installment of that exciting series? Will there ever be any more of a crossover other than Eli Glinn’s presence?

Doug: Yes, and the next Gideon Crew novel, entitled THE LOST ISLAND, will be published in the late summer of 2014. It is a story involving an ancient illuminated manuscript, a mysterious map, and a harrowing journey through an isolated and forgotten corner of the Caribbean Sea.

Linc: There will be a fourth installment in the Gideon series, and there will be what we think is a huge crossover into one of our early novels. Our projected title alone probably says it better than I could: BEYOND THE ICE LIMIT.

7. Do you plan on releasing any more short stories like Extraction? It was a fun story, and a good way to help satiate some of your fans’ ravenous hunger for more Pendergast!

Doug: Absolutely. We are working on some wild ideas for a Pendergast story. Those who subscribe to our newsletter, “The Pendergast File,” will get advance notice.

8. Mr. Child, I read The Third Gate last year and really loved it! Any plans on writing another book with Jeremy Logan? I very much enjoyed his character and would love to see him return! Or maybe one of the protagonists from Terminal Freeze or Deep Storm?

Linc: Thank you so much! Yes, I am hard at work on another novel featuring the ‘enigmalogist’ Jeremy Logan, and I’m very excited about how it’s progressing.

9. Mr. Preston, I’d love to see another book starring Wyman Ford soon, or maybe a return of Tom and Sally in one of those Wyman Ford books. Any updates on when we’ll get another Ford book?

Doug: Yes. My next solo novel, entitled THE KRAKEN MISSION, will be published in May of 2014. It stars Wyman Ford.

10. Lastly, as both of your started out as editors, do you have any tips on writing for other aspiring authors? Did that experience as editors help you in your own writing, or did you prove, like doctors, to be a “terrible patient” if you will?

Again, thank you so much for taking the time out of your busy schedules of writing and being awesome to answer a few questions for your fans! We (and by we, I definitely mean *ME!!!*) can’t wait for more Pendergast, and honestly, anything else with Preston or Child on the cover. Thanks for a fantastic new installment in the epic saga that is the Pendergast series, and for more Corrie!

Doug: Our experience as editors definitely helped. Honestly, seeing what doesn’t work in other people’s manuscripts is a great help, so we know what to avoid. That may be even more valuable than figuring out what works. As for tips, my advice to the aspiring writer is to write every day. Just as violinists must practice daily and marathon runners must run, writers must write. It seems obvious, but you would be surprised at how many writers only sit down to work once or twice a week. You have to do it every day and you have to carve out a sacred, inviolate period of time to do it in, and be sure your family and friends are instructed not to disturb you during that time! My second tip is to get involved in a writers’ group, where you read and critique each other’s work.

Thank you for the great questions and for all your kind words about our books! We love interacting with readers through email, which we answer http://www.prestonchild.com/faq/contact/Contact-the-Authors;art137,173

a Rafflecopter giveaway
Posted by Dan Schwent at 12:00 AM