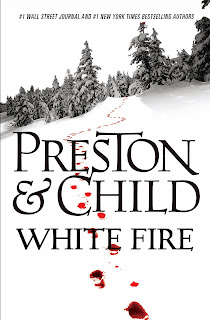 The RECAP:
Corrie Swanson needs to make a huge splash on her thesis, as she’s competing in John Jay College’s Rosewell Prize for Outstanding thesis and a junior, like her, has never won before. After a few failed attempts to pitch ideas to her advisor, a conversation with the College’s museum/library coordinator leads her to an interesting tale: Oscar Wilde, famed author, heard tales of bear attacks in Roaring Fork, Colorado, in which the bears devoured the victims. Thinking that she could provide a huge contribution to research in the area of animal markings left on bones, she forces her advisor’s hand into approval and sets out to the rich tourist trap of a town. The ski resort city, while at first seeming to be friendly and willing to lend her a hand, soon closes the proverbial doors on her. Things escalate, leaving Corrie in prison for a simple B&E, and Pendergast steps in. Good thing too, because Corrie’s discoveries reveal that it was something other than a bear that ate those miners a century before… and soon, a serial arson killer joins the fray. The slow burn becomes a raging fire and a race against time as three massive storylines, along with a Sherlock Holmes and Arthur Conan Doyle thread, reach an explosive, fiery finish.


The REVIEW:
Wow, what a ride! This might just be my favorite entry to the series since Book of the Dead. Not to say there haven’t been some great books since the end of the Diogenes trilogy, but this one really raises the bar. Fast-paced, chock full of murders, Sherlock Holmes, shocking twists near the end, great new characters, and even a moment of Pendergast showing some real emotion.


There are three main storylines in White Fire:
1. Corrie’s thesis project, based around the bodies of 9 miners who had been killed and eaten by *something* in the 1870s, when the town was still a huge mining area rather than a ritzy ski resort -- and the powers controlling the town fighting against her solving the mystery.
2. A serial killer and arsonist, murdering townie after townie and burning their bodies and their homes, as Pendergast works with local law enforcement (who are in over their heads with said killer) to catch them as soon as possible.
3. The search for a lost Sherlock Holmes story that Conan Doyle wrote after hearing a disturbing tale from Oscar Wilde at a chance dinner meeting.

All three of them are done well and integrated seamlessly into one big novel. The ending is cringeworthy, in a good way… it will have you on the edge of your seat as you await the conclusion, which ties up well, and hopefully has brought a new character into our beloved cast of recurring players.

Overall, I give this story a 5 out of 5 stars. One of my favorite reads of the year, and one of my favorite entries of the series, right up there with Still Life with Crows, Book of the Dead, and my personal number one, Cabinet of Curiosities.

a Rafflecopter giveaway
*I was provided an ARC for review by the publisher and Netgalley.
Posted by Dan Schwent at 12:00 AM