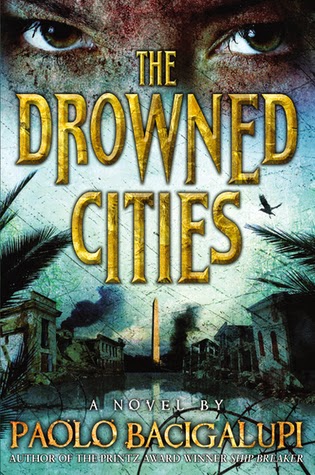 
In a dark future America where violence, terror, and grief touch everyone, young refugees Mahlia and Mouse have managed to leave behind the war-torn lands of the Drowned Cities by escaping into the jungle outskirts. But when they discover a wounded half-man--a bioengineered war beast named Tool--who is being hunted by a vengeful band of soldiers, their fragile existence quickly collapses. One is taken prisoner by merciless soldier boys, and the other is faced with an impossible decision: Risk everything to save a friend, or flee to a place where freedom might finally be possible.

This thrilling companion to Paolo Bacigalupi's highly acclaimed Ship Breaker is a haunting and powerful story of loyalty, survival, and heart-pounding adventure.

Being unemployed can be nice. It’s been a long time since I’ve been able to read a book all the way through, barely stopping for meals or a drink. Since this was such a page-turner, I surely would have been late to work or missed an appointment.

Though this is the sequel to Ship Breaker, there is a different set of characters. Mahlia and Mouse are two young refugees who fled their home to escape the terrible violence going on in the Drowned Cities. Now they are in the care of Dr. Mahfouz, a man with a peaceful heart whose life is devoted to caring for others. Mahlia is invaluable as the doctor’s assistant, despite her lack of a right hand which was chopped off by the Army of God. Though they have a good life with the doctor, they are still outsiders, constantly reminded of the fact they are “castoffs” or “war maggots.”

Their lives change drastically when they discover the severely wounded Tool, who is a “half-man” engineered for war. Part tiger, part hyena, part dog, and part man, Tool has exceptional strength and endurance. He also has retained human characteristics, which makes him a really fascinating character.

Once Tool receives the antiobiotics he needs to survive, the doctor decides to return to the village which is now overrun with soldiers and Mahlia has a choice to return to her village or to flee with Tool. Mouse returns to the village and finds his life is irrevocably changed, as he is armed, branded and now a soldier. Mahlia is strong, brave, determined and risks her life and safety to get Mouse back.

This story is not as action-packed as the first, but the character development is much stronger and the story is considerably darker. It explores the physical and psychological effects of war – on children, families, communities and infrastructure.

It is brutal, harrowing, sad, frightening, and humane. It lacked the fun and adventure of Ship Breaker, but I was absorbed into the story instantly and unable to stop reading until I was done.

Because of the graphic situations, I would recommend this to older teens.

I love Bacigalupi’s writing and can’t wait to read his adult books!
Also posted at Goodreads.
Posted by Nancy at 9:49 AM