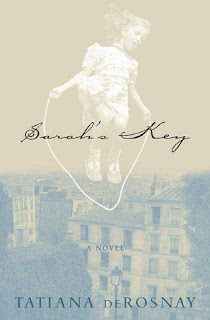 Paris, July 1942: Sarah, a ten year-old girl, is brutally arrested with her family by the French police in the Vel' d'Hiv' roundup, but not before she locks her younger brother in a cupboard in the family's apartment, thinking that she will be back within a few hours.

Paris, May 2002: On Vel' d'Hiv's 60th anniversary, journalist Julia Jarmond is asked to write an article about this black day in France's past. Through her contemporary investigation, she stumbles onto a trail of long-hidden family secrets that connect her to Sarah. Julia finds herself compelled to retrace the girl's ordeal, from that terrible term in the Vel d'Hiv', to the camps, and beyond. As she probes into Sarah's past, she begins to question her own place in France, and to reevaluate her marriage and her life

This is a horror story of a different kind having it's roots based in real life events. A story I knew nothing about until it was briefly mentioned in The Tropic of Cancer and I read this book. The French's gathering and deportation of the Jews in France known as Vel' d'Hiv round up. Most people seem to be familiar with the German and Polish ones but this one managed to remain under the radar until recently.

Using alternating chapters of their stories helped with building an eventual congruence between the two main characters. I really would have preferred more of Sarah and less of Julia but that may have lessened the impact of how their lives intersected. I found I just couldn't get as emotionally involved with Julia's family drama as I could with Sarah's but she was needed to bring Sarah's tale to a conclusion.

How terrifying the Holocaust was but hearing it from a child's perspective just drives that home so much more. Not to mention a side tragedy which is actually the center of Sarah's story and perhaps her life changing moment and not the round up itself.


This is well worth reading for the history despite the predictable ending and somewhat lacking prose. Ms de Rosnay has some talent but needs to give her characters and stories a bit more depth.
Posted by Zorena Deckard at 10:00 AM