A Sad and Beautiful Appalachian Tale 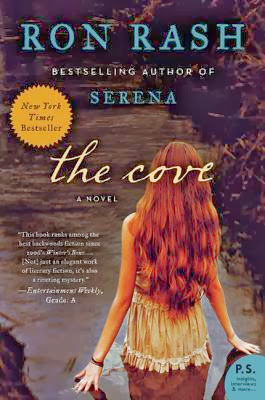 The Cove
by Ron Rash
Published by Ecco

The small, isolated community of Mars Hill, North Carolina, continues to cling to the prejudices and Appalachian superstitions of another century in the wake of World War I. Its men have been to fight in foreign lands, encountered the awesome terror of modernized warfare, and yet still harbor a profound fear of a young woman who lives sadly and quietly in a place simply known as "The Cove." Laurel Shelton's life, thanks to the people of Mars Hill, has not been an easy one. Marked by the port-wine stain on her shoulder and by the misfortune of living on land that is believed to be the home of some nebulous evil, Laurel is labeled a witch and ostracized from the community--banned from the school, humiliated by the young men, and shunned by the proprietors of local businesses. It doesn't help that The Cove seems to consume everything with which it comes into contact; Laurel's parents both die under unfortunate and unexpected circumstances, the blighted chestnut trees stop producing, and there are fewer Carolina parakeets with every passing year.

When her brother and protector, Hank, leaves for war, Laurel is left alone to fend for herself on the farm and it seems as though happiness will forever remain out of her reach. But Hank returns, having lost a hand to the war, and it seems as though things might finally get better. Hank is getting married, the farm responds to his hard work, and a stranger in the woods may offer Laurel an escape from The Cove's clutches.

Ultimately, The Cove is about the danger of instinctively hating that which we don't understand. Ignorance and intolerance make Laurel an outcast and The Cove itself becomes the physical manifestation of the community's rejection of her for the crime of being "different." Just as the darkness of The Cove absorbs and destroys the beauty of its inhabitants, the human capacity for hatred destroys the most fragile and beautiful among us. To watch as Laurel slowly becomes hopeful that life will hold something better than she's been allowed to expect--to come to believe that she deserves to be allowed this hope--is painfully heart-wrenching. However, there are no happily ever afters here. Just as the cliff looms ominously over The Cove, the foreboding that something will crush this nascent hope pervades the narrative.

Rash's writing is lyrical and simple in the best possible sense; there's no poetic posturing or pretentiousness. To capture such bruised lives in straightforward, lovely language imbues his characters with a genuine and honest dignity.

Two factors prevented me from giving it a 4 star. The first is that I kept measuring this book against Charles Frazier's Cold Mountain. While Rash does a fine job of capturing the atmosphere of the place, he lacks the lush detail of Frazier's work that truly brought the land alive for me as a reader. Frazier's portrayal of two damaged characters, Ada and Inman, is also more nuanced and three dimensional. While Rash's portrayal of Laurel and Chauncey Feith (the villain of the tale, which is made clear from the introduction of this selfish, pompous bastard) is inspired, many of his other characters are little more than well-written stereotypes. The second is that the denouement seems too abrupt in its execution and, while brutal and violent, the emotional punch is lessened by how swiftly events are brought to a close.

Despite these factors, The Cove is a much finer piece of writing than much of what is out there and I look forward to reading Rash's Serena.
Posted by Amanda at 5:00 AM