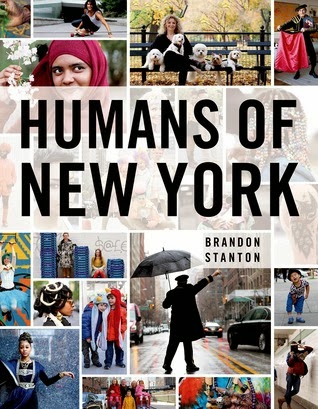 
I’ve been following Humans of New York on Facebook for some time now. As a long time NYC-ophile, it captures everything I love about the people-zoo that is my vision of New York. Although I’ve become a devoted library user in the interests of space, economy and the minimally acquisitive life, I recently decided I needed to make both space and budget for those I’ve been following for free on-line (The Oatmeal, Hyperbole and a Half and Sylvia, to name some others) and Stanton’s newly published collection from his HONY work was at the top of the list.

Humans of New York is a collection of a wide range of his works, both ‘earlier’ in his photography career and more recent. The only word I have for the variety of images is ‘amazing.’ I laughed out loud. I had moments of heart-clench and lip-biting. Many of the images in here are iconic New York: the homeless, the artists, the heavily tattooed, street performers, chess players in the park, the doorman hailing a cab, a boxer on the Brooklyn bridge and teens flashing gang signs. But Stanton’s style goes somewhat further, seeking to humanize the subject more than objectify. Many of his later photos come with a story: the drag queen who plans to become a rock star, the janitor who earned a Columbia degree after 11 years, elderly gay couples supporting each other through the snow, a child on a scooter escorting a grandpa in a wheelchair, a sidewise look from a dog while his owner works, a woman in furs in the park too busy painting to stop and chat, children hanging off fences for the camera after being stopped by a police officer. Stanton makes a point of asking permission, which occasionally interrupts spontaneity, but is ultimately respectful of his subjects.

Photos are loosely organized: sometimes a small collection of people holding hands, Central Park in spring, a collection of feet, a theme of success or love. He’s an all-opportunity photographer, sometimes seeking to including background as subject–subway tunnel steam rising around two child ballet dancers, a vacant lot, a cherry tree, graffiti, a field of flowers.

I can’t even say which one was my favorite, as it’s one of those books that has a favorite every other page. A man dressed suspiciously like Waldo and an Elmo costume in a net bag both made me laugh out loud, but I suppose if I have to choose, my favorites are the moments of wisdom from the elders (“I’m ninety-nine years old. Everything from my neck down is shit, but from my neck up is just as good as everyone else’s. How lucky is that?“) and the pictures of same-sex couples, the same-sexuality incidental to the visuals and the quotes. Stanton shows us the best of ourselves, celebrating our differences and emphasizing our humanity.

In Stanton’s more recent works, he’s branched out into interviewing, bringing another fascinating dimension to the visuals. Almost every day, at least one of his HONY posts move me, whether it’s with laughter, fondness, or compassion. The images remain fabulous, but it has been the quotes which seal the deal:

“I didn’t sleep much last night. I’ve been feeling a little blue.”
“Why’s that?”
“Oh, you know. The holidays. Memories, memories…” “I could look poised in a paper bag. These are ladies’ pants, I don’t even care.“ And finally:
“Wendell is hands down the greatest homeless fashion designer who ever lived. He makes almost all his clothes from things he finds. I hadn’t seen him in awhile, so I was quite thrilled to walk up on him Tuesday, doing this to a Gandhi statue.“ If you are a fan of New York, of the diversity of the ways humanity invents and re-invents itself, of those rare moments of self-exposure and sharing, you should check out Stanton’s site and his book.


Cross-posted at:  http://clsiewert.wordpress.com/2013/12/25/humans-of-new-york-by-brandon-stanton-recommended-for-humans/
Posted by carol at 11:30 AM