"But primal dreams have made me wise..." 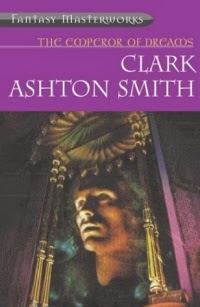 The Emperor of Dreams


Ah, Clark Ashton Smith. For those of you unfamiliar with this writer imagine someone with the fevered imagination of Lovecraft and the lyrical stylistic chops of Lord Dunsany and you'll get an idea of what you're in for. For my money Smith is perhaps the best of the "Weird Tales Triumvirate" of Lovecraft, Robert E. Howard and Ashton Smith. I would probably place Howard as a close second on that list...heresy I know, but for all of the coolness of Lovecraft's ideas he really was just a god-awful writer.
Take a dip into this tome and visit one of Smith's created worlds: medieval Averoigne, antediluvian Poseidonis, far future Zothique, or ancient Hyperborea, all tinged with the dark fantasy Cthulhoid elements borrowed from his friend Lovecraft and embellished with his delicious prose.
I'd heartily recommend the tales "The Double Shadow", "The Beast of Averoigne", "Mother of Toads", and the 'Malygris tales' "The Last Incantation" & "The Death of Malygris" as good starting points, though there are few places to go wrong here.

Also posted at Goodreads
Posted by Terry at 11:50 AM