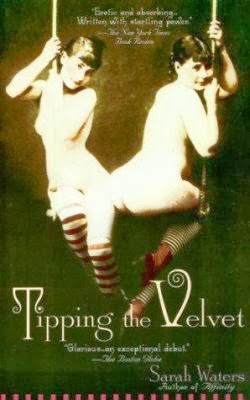 This delicious, steamy debut novel chronicles the adventures of Nan King, who begins life as an oyster girl in the provincial seaside town of Whitstable and whose fortunes are forever changed when she falls in love with a cross-dressing music-hall singer named Miss Kitty Butler.

When Kitty is called up to London for an engagement on "Grease Paint Avenue," Nan follows as her dresser and secret lover, and, soon after, dons trousers herself and joins the act. In time, Kitty breaks her heart, and Nan assumes the guise of butch roue to commence her own thrilling and varied sexual education - a sort of Moll Flanders in drag - finally finding friendship and true love in the most unexpected places. (The Daily Telegraph)

While I have seen this book classified as a romance novel I was well pleased to find out it wasn't just that. It has romantic parts and sure there's some sex but it doesn't seem to be the mainstay of the story. Still, for those that like that, you'll get enough to titillate you but not so much that it would make the book considered trashy.

I can only describe it as a really good read and that is mostly due to the stellar writing and research done by the author. Like Tim Powers, Ms Waters has done her homework. This is the gritty and very real city of London in the late Victorian era. Her heroine has some very harsh life lessons handed out by the city itself and her perceived status in it. I have to say that I really enjoyed learning about turn of the century music halls and all the backstage doings that went with them. The history lesson in the hidden gay subculture was also a delightful eye opener.

This is a very different coming of age story and I love what the author did with it. Speaking of which, I think I'll be hunting out more books by Sarah Waters.