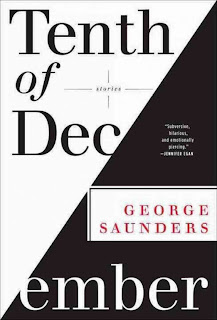 Tenth of December by George Saunders
2013
Reviewed by Diane K. M.
My rating: 4 out of 5 stars


I like reading short stories but I hate writing about them. A short story is so fleeting and ephemeral -- it's like trying to describe a cloud.

This collection of 10 short stories by George Saunders is especially difficult and elusive. His writing is rich and visual, but there is always danger lurking for each character. I had to take a pause break after finishing each story because I felt so unsettled.

My favorite stories were "Victory Lap," which involved two high school students and a traumatic incident; "Escape from Spiderhead" about a prison inmate who is enrolled in a chemical testing study; "Puppy" about two women trying to make the right choices for their children, albeit in very different ways; and "Exhortation," which is a company memo written to boost employee morale in a challenging job.

I wanted to read this book because of a fantastic article written about Saunders in The New York Times earlier this year. That article references a lovely convocation speech he gave, in which he advocates for treating others more kindly:

"What I regret most in my life are failures of kindness. Those moments when another human being was there, in front of me, suffering, and I responded…sensibly.  Reservedly.  Mildly.

"Or, to look at it from the other end of the telescope:  Who, in your life, do you remember most fondly, with the most undeniable feelings of warmth? Those who were kindest to you, I bet.

"It’s a little facile, maybe, and certainly hard to implement, but I’d say, as a goal in life, you could do worse than: Try to be kinder."

Posted by DianeLibrarian at 7:00 AM